So a couple of weekends ago, I was working on cutting up and clearing a big tree that had blown down in a storm some time ago. It hadn’t been a priority for me, and as such, “nature” had grown up some around it. In cutting and clearing it, I was taking all the usual appropriate precautions one should when working with things like a chain saw, an axe, a machete, etc. Murphy, though, is a constant presence in my life, and as such, made an appearance despite my best efforts to keep him at bay. Long story short, I dropped a fairly large part of tree trunk, at the cut end, directly on top of and inline with my foot, with the 90 deg cut corner landing directly on top of my instep. After getting my father to help me move it off of my foot, mentally uttering words for which I needed to ask forgiveness for later, and of course regaining my breath that had instantly vacated my lungs due to the pain, I decided I’d just suck it up like usual and “walk” it off.

We finished working, and by the time we did, my foot had went from wow that really hurts, to full-fledged, holy crap I can’t walk on it pain, and my boot had become oddly tight fitting. After coming inside and taking a shower, I discussed the situation with my wife, the whole time getting the “really, can’t you do anything without getting hurt” look, and we decided it was best to not wait until Monday to get it checked out. So off to the ER we went, with what I was fairly certain was, as was my very close medical friend with who I’d been texting, a broken foot. After some x-rays, it was determined that it was actually not broken, but I did have a lot of soft tissue damage. The Dr. was worried about the swelling cutting off circulation to my foot. A doppler ultrasound showed there was indeed a pulse. I was given some pain meds, orders to stay off it for the next few days with it constantly elevated and iced, and sent home with a shiny new set of aluminum crutches. I was to monitor the swelling closely, and if it got any worse, was to come back right away.

After getting home, my medical friend and I were discussing the situation, and how lucky I had been. We also discussed how even though I was taking all the reasonable precautions, I still got hurt. Sometimes, it just happens. This led him to pondering what he would have to do, if one of our “family” got such an injury in a true grid down/wrol type environment. Now, my medical friend is very good, with many years of experience. However, he said in this situation, with a lack of ability to x-ray things, etc.., he would have had to treat it as if it were broken. That would mean putting it in a splint, wrapping it good, administering anti-inflammatory meds such as ibuprofen, and then putting the patient on bed rest. Even if the pain went away within a day or two, as mind did, he’d still have to keep that person off their feet as if it were a slight fracture and not a full break, and the person started putting weight on it again too soon, it could turn that slight fracture into a full break and cause much worse problems. So something that simple, could take a person out for probably a couple of weeks at best.

We further discussed the subject, and how so many folks put away medical items to treat gunshot wounds and bad bleeding injuries, but how many actually put away things like splints, ACE bandages, bulk bottles of ibuprofen and Tylenol? How about crutches? Etc… The fact is, we’ll probably see a lot of injuries like mine, especially in the early weeks/months of an event, but also throughout a long term one as folks have to do more “manual” labor jobs. We’ll probably also see lots of laceration injuries via knives, axes, and other sharp implements from people who are otherwise not accustomed to and experienced in using them, and forced to. Items to treat such injuries can be obtained just as easily as the aforementioned splints, ACE bandages, etc.., but how many of us actually get and store them? And how many store enough to treat those types on wounds and injuries multiple times?

Emergency bandages, hemostatic gauze, and tourniquets are all important and should be part of our stored medical supplies. But don’t overlook items for all the other types of injuries we may face. Truth be told, while gunshot wounds are a definitely possibility, and even likely, sprains, fractures, deep bruising and laceration type injures are probably far MORE likely. Make sure you rounds out your medical supplies as much as possible and cover all the bases as best as you can. Also, just as you should with gunshot wound treatment items, study up (and preferably get some basic training) on using those other items as well. Remember, it’s hard to treat a broken foot with a pressure bandage and a tourniquet. 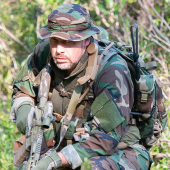