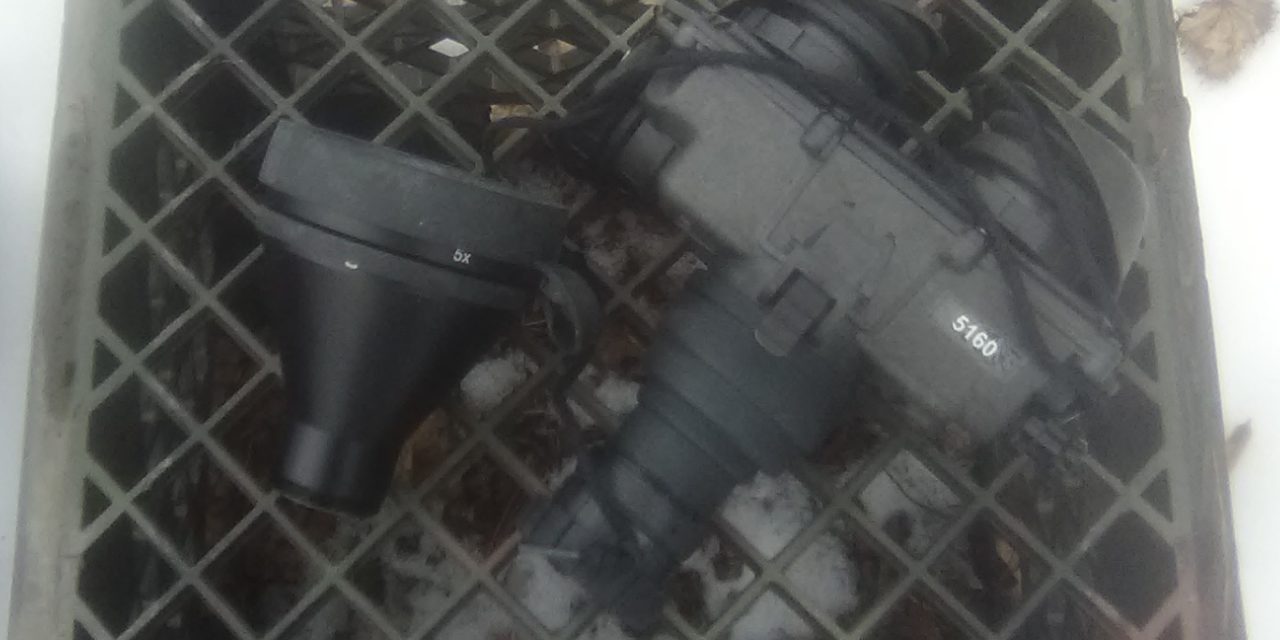 A few things should come to mind when you think of items that are considered “Force Multipliers”. Good Commo, Night and Thermal vision, and some good optics with special features. These all make things easier and more sure when it counts.  Use of those items along with other visual aids can help positively identify (PID) friend from foe. In a combat zone, PID is a must. Even more so would be the need for PID if you and yours are to survive a WROL situation.

Burris XTS 2575 spotting scope on left, Armasight 7×50 with M22 Mil rangefinder reticle on right. Both are no longer available for sale, but other versions of these items are readily available.

When we think of having to occupy either a permanent or temporary Listening Post/Observation Post (LP/OP), what are some of the tools you think you’d need at your disposal? In the realm of commo, for me it would be a radio and a field phone. That way you have a wireless means of commo, but more importantly, with the field phones, you have a means of commo that can’t be intercepted unless it’s spliced into on the actual wire.

When it comes to optics for an LP-OP type post, they should be geared towards “overlap/confirmation” type devices. What do I mean by “Overlap/Confirmation”? Simply this. When it comes to overlapping or confirming something with optics, I’m talking about being able to easily transition from one system to another. This is either a more powerful optic, or a different systems such as night vision or a thermal imager, to confirm whether it is a friend or foe you are observing.

As an example, we have “Sarah the Survivalist” who has the “fortune” of pulling LP/OP duty this morning ( midnight shift) for the retreat group she is part of. It’s been a boring shift so far, but just as she’s about to drink some coffee from the thermos, she catches movement out of the corner of her eye.

FLIR Scout 240 thermal imager. $1500 but worth every penny as a night or DAYTIME viewer.

Sarah puts down the thermos, picks up her binos, and although it is still early dawn and still somewhat dark, she is easily able to confirm it was just some small birds moving in the leaves approximately 50 meters away. Sarah is using a pair of 7×50 binos that are easy to use and are well equipped to see in low light, due to their large and moderately magnified lenses.

Same as scenario #1 above, but Sarah can’t quite make out the movement’s source, so she pulls out a FLIR thermal viewer. Low and behold, it’s two individuals low crawling very slowly through low lying ground (shallow defilade) in the retreat’s perimeter. What the binos had a hard time making out with their non enhanced optical capability, the thermal showed very quickly what was what. Sarah calls in to the “Charge of Quarters” (CQ) desk, personnel are placed on standby and the infiltrators are engaged when they hit a trip wire flare.

“Pete the Prepper” is pulling LP/OP duty one afternoon, and while scanning the treeline in his LP/OP’s area of responsibility with binos, he sees what appears to be a couple armed men approximately 500 meters away. Pete’s rifle of choice only has a 1-6x optic on it (and that won’t help with identifying the individuals at that distance), so he gets behind the spotting scope, turns it up to 40x, and sees it is a neighbor with his sons and they are carrying rifles and an ax. Although Pete could identify that they were armed while using the binos, but he could not positively identify (PID) those guys without the more powerful optical capability that the spotting scope provided.

“Pete the Prepper” is pulling night duty at the LP/OP and it is raining with a bit of light fog. The 7×50 binos that are in the LP/OP don’t do much except show ghosts. Pete has been using the PVS-7 night vision goggles with a 5x magnifier screwed on the objective lens for the last couple hours. The Night Optical Device (NOD) works ok to a point for this night, but Pete sees something moving in the distance, and he can’t make out what it is, due to the light fog. It is about 175 meters out, and he only sees fleeting images of it as it moves from left to right towards the perimeter wire.

Pete gets out the FLIR thermal viewer and is immediately able to see it is a lone gunman creeping towards the perimeter of their retreat. Pete calls his security counterpart sitting at the CQ desk, over the field phone, and a “Stand To” is alerted. When all security posts are manned, he fires an illumination flare which catches the individual out in the open. At that time, the individual opens fire and is engaged by the members of the retreat.

One evening, “Isaac the Idiot” is “pullin’ security” as his buddies call it. His group has all the latest high end rifles from SCAR’s to Knight Armament SR-25’s to LWRC piston guns. Of course all of them have high end Nightforce or Leupold scopes or ACOG optics on their rifles, so when it came time for other, more boring items like quality binos and night vision, they all bought the $25 Walmart specials and $125 “Gen 1” goggles because they spent the coin on what looked good in their “Tacti-selfies” on social media.

As Isaac is sittin’ there, he thinks he sees movement in the clearing in front of him. He looks with his binos…nothing. He looks with his night vision and all he sees is an unidentifiable, dark blob. He pulls up his high end, super deluxe Leupold MK4 LR/T 10×40 Mildot scope mounted to his SCAR-H, and what does he see? He sees a dark blob running directly towards his position! Holy Cow! No one is supposed to be back from the patrol for another day or so! INTRUDER…..BANG!

Isaac just shot a member of his group. That member was part of a reconnaissance patrol they sent out the afternoon before to see what was going on in their area. That patrol had been ambushed, and “Louis the Lucky” had been wounded and was the only survivor of that patrol……until Isaac. Isaac had nothing to be able to positively identify anything in his LP/OP area of responsibility at night. Just like their lack of planning to have the optics needed for situations like this, Isaac’s group had not gone over a “Challenge and Password” or what a running password is, and how to use it.

Optics play a big role during the day, and special optics can play an even bigger role at night (when you should expect an attack). The basics for night observation start with a good pair of 7×50 binos. It has been shown that the 50mm objective lens size, combined with no more than a 7 power magnification, make for an extraordinary combination to see in very low light.

7×50’s also work well during the day, and combined with a good spotting scope, will positively identify objects out to, and beyond, realistic engagement ranges. a good 20-50x spotting scope will get the job done, and there are many on the market. Another advantage of binos is the availability of a built in range finder scale (M22). By the way, If you are at a fixed location or even a temporary one, you should have a Range Card (post for another day) made for every position on the perimeter.

Even if you are in a temporary patrol base, a basic range card should be developed. A nice to have for doing this is some type of range finder. Whether it’s a “no batteries required”, “coincidence” type (Bushnell) or the battery operated old or newer laser type (Leica, etc.) range finders. Both will do the job.

Night time LP-OP duties can be difficult in many ways. You’re probably fighting off sleep. If you’re tired, you will see things that aren’t there. Worst of all is if it is bone chilling cold, since this just adds insult to the other issues you are already dealing with. Having quality gear to positively identify what you are seeing is crucial to make sure you don’t engage an innocent. 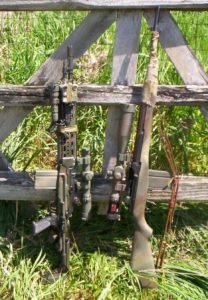 You don’t always have the opportunity to use your rifle optics for detailed observation. The rifle on the left only has a 1-4x scope, while the one on the right has a 4-16x.

Of all the items mentioned in this post, I recommend you at least have a good pair of 7×50 bino, and a thermal imager. The binos are good for the majority of things you will need to observe in an LP-OP setting, and the thermal viewer will help discriminate the difference between a friend or foe whether day or night.

Hopefully, this post has given you some ideas of what scenarios you should plan for, and what you will need to survive them. We have the benefit of many durable, quality “Force Multipliers” available to us these days. It makes sense to at least minimally equip yourself with a few to give yourself every advantage possible.

Night vision on rifle and helmet, IR laser on the rifle for use with the goggles and good commo. These are force multipliers that are not only available to Soldiers, but are available to you as a civilian. 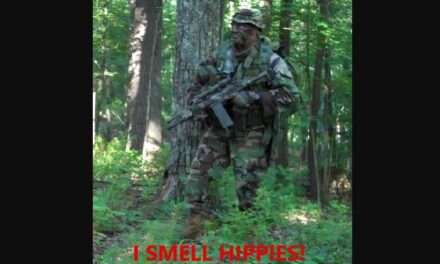 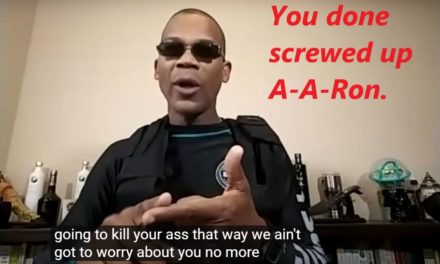 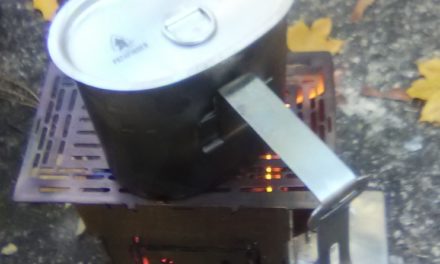 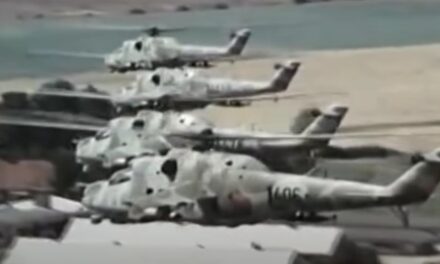