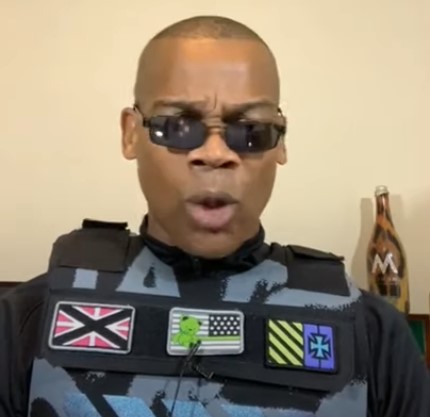 I know a lot of people see the leader of NFAC, John Johnson (J-J-RoN) as a weapons-illiterate imbecile, a narcissist and a blow hard, but the truth is far more disturbing. J-J-Ron’s plan is to try and bring the U.N. in on his side and have them force the compliance of the U.S. Government. This first video shows some….inconsistency (read that as “lie”) in his…..explanation of the AR-15.

After seeing him stupidly flash his DD-214 on one of his videos, I realized he is definitely not a leader in the tactical or strategic sense. This is simply due to his lack of any experience in that area. If this is actually his DD-214 as he says, it looks like he enlisted in October 1989 and was “Delayed Entry” for a year. 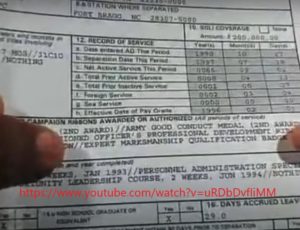 J-J-RoN went to the “Admin Specialists Course” in late ’93 or early ’94, and to PLDC (Sergeants Course) in June of ’94. Indications are he became an Admin Weenie after that, culminating with a promotion to Sergeant in February ’96, and got out in July of ’97. 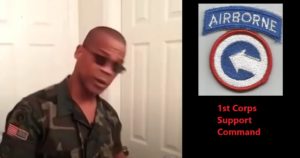 His “Combat Patch” is from a Support Command outfit.

Why am I listing his MilCreds? Two reasons, first, although he is obviously not a guy who knows or can teach tactics from experience, he does have some military background. Second, as much as he tries to relay an, “I’m a bad ass” demeanor, using his Mil background as his raison d’être, he’s a blowhard wanna be with obvious “Little Man” issues, and can’t back up that status up with creds.

When you listen to his “Weapons Logistics” diatribe (that was more than likely accumulated from the “Weapons Selection Queue” from Modern Warfare 3), you realize this guy has no clue about how weapons are selected for use and from a logistics standpoint and also how logistics factor into the number of types of weapons you choose.

Four different 5.56 rifles listed using three different types of mags? The AK-101 (the “Standard Rifle”), the Mini-14 (reserves LOL)  TAR-21 (vehicle troops), and the HK416 (for his “Special Forces”), plus, to top it off, the Uzi LOL. Anyone who has handled an Uzi, knows they don’t want to carry it if they have other compact long guns to choose from (it weighs 9 lbs. and is only in a pistol caliber).

He mentions GPMG (General Purpose Machine Gun) at a cost of 66 million, but never mentions which manufacturer, model and variant. He apparently doesn’t know “GPMG” is the name for a type of firearm made to fill a medium or light machine gun role, not the name of a specific model or make of firearm.

Round this out with his listing of FOUR different man carried, rocket launching systems (the “Modified RPG-7”, the Chinese PF98, the Javelin, and the SMAW), and he has a military logistics nightmare for his new U.N. approved fledgling country. This isn’t even half of the crap he said he’d need to arm his new “Black” militia/military.

As usual, he’s encouraging his group to expect hand outs and entitlements, just on an International scale. I’m curious what Nation is gonna give them land to create their own new, autonomous “Black Nation”? Since when does anyone give land away? You generally gain it through purchase or conquest. On the world stage there is no “EBT Card” for land, resources or supplies.

The days of the U.N. telling the U.S. they need to pay for anything has gone out the window, and if anyone thinks they will get what they want, “When Biden gets in”, they might want to think again. If Biden takes the Presidency, there will be a lot more important things to worry about in this country than a bunch of cry babies who aren’t getting something they never earned.

In closing, I have two things I’d like to make clear. First, my nickname for him is”J-J-RoN” because his name is John Johnson, and he’s “Ready or NOT”. I refuse to use some stupid title he’s given himself just so he can feel important.

Second, if you guys want to leave, go for it, nobody’s stoppin’ you. I’ll tell you the same thing I said when all the actors and media turds said they were leaving after President Trump’s 2016 victory, “Don’t let the door hit you in the ass on the way out, you ungrateful, freeloading imbeciles.”.

If you think you’re gonna find “Wakanda”, you’re fantasy will probably get you, and those you’re responsible for, killed. I figure not very many, if any, will go. Why? It’s simple. You guys can’t even motivate yourselves to clean up your crime riddled, black neighborhoods, you know, the most crime infested areas in our Nation. Motivation to move across the world? Nah. 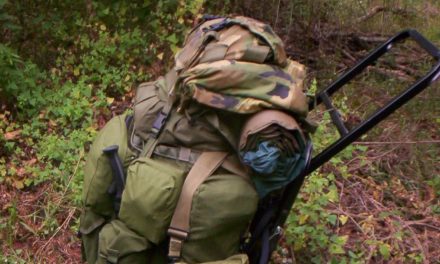 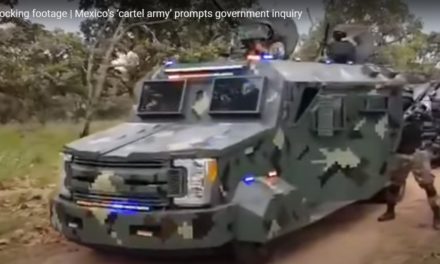 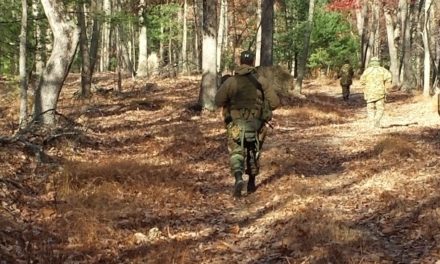