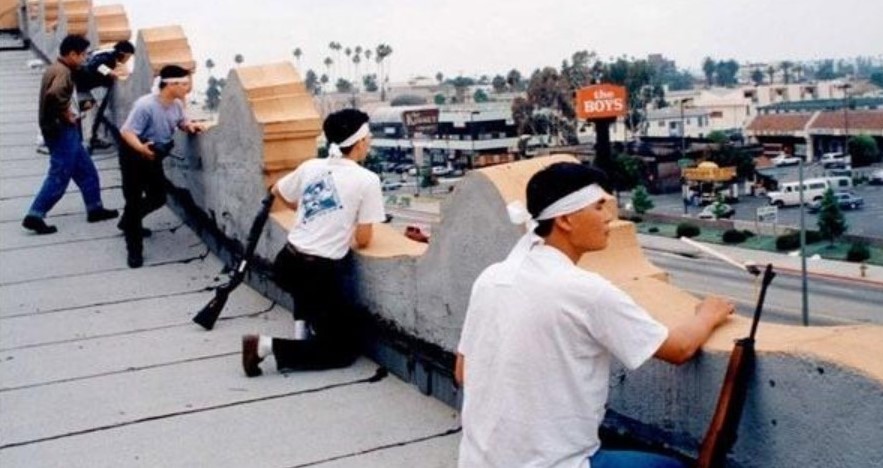 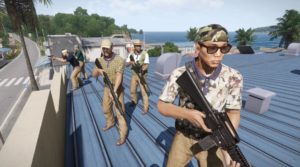 The famous “Roof Koreans” during the 1992 LA Riots. Note that none of them are carrying the same weapon.

How many times have you heard a buddy or gun “guru” say. “Well I don’t care what they are carrying, I’m carrying my trusty Insert favorite firearm.” We all have a “Favorite” or as I like to call it, my “Go To” weapon. For some context concerning logistics, let’s look at what the 1903 Dick Act (“Efficiency in Militia Act of 1903”) did for the militias that found out they had some organizational and supply issues during the Spanish American War.

The fighting in the Spanish-American War lasted all of about four months. During that period, many American militia volunteers brought their own rifles with them to fight. The number of different rifles used by the America Volunteer militias and the U.S. Army, numbered over 20 different models, whereas the Spanish had two.

The logistics support and supply of troops in combat with ammo, parts and accessories can be tough, even when you only have a few different types of weapons. That issue pales when compared to the logistics issues that can be present during an actual fight.

The Dick Act of 1903 primarily did two things. It made the Militia of each State, an entity recognized by the Federal Government as the National Guard (The Organized Militia). Second, it required that all National Guard units were organized and had a structure identical to the Active Army, and that the NG received the same training, uniforms, weapons and gear as the Active Army. 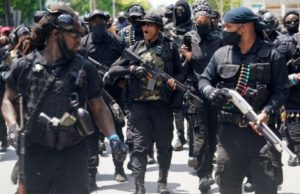 Although I’ve seen a number of AR’s in pics of J-J-RoN and his NFACkers, this pic shows a lack of forethought in the “Weapons Logistics” department. Remember, their Negligent Discharge weapon from Louisville was a lever action rifle.

Although uniforms can be a big deal in a combat environment for identification purposes, a more important subset of that need can be one’s headgear, or more specifically, the silhouette of that headgear in a low light environment. In one Unit I served with, all team members were required to wear the same headgear on a patrol, whether it was a watch cap, patrol cap, or boonie hat. This was to help aid in identifying each other in low light.

More importantly, if you are in the middle of a fight, is your ability to gain ammo resupply from a fellow combatant. This doesn’t just mean having weapons of the same caliber, it means having weapons that take the same magazine as well.

A while back (2003), a friend of mine was giving me grief, concerning my choice of the M1A rifle as my “Fighting Weapon”. Like me, he was a big FAL fan, and couldn’t understand my change. I explained that the chance of fighting with or beside guys who were present or former Mil was high. Since the M14 was back in prominence as a Designated Marksman’s Rifle for many branches, the possibility of easier resupply of ammo, and especially mags and parts, existed. With the FAL, it did not. 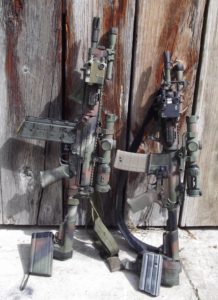 My present “Go To” for a “Survival Weapon” is the 11″ ParaFAL. It will shoot the very effective, and readily available, 7.62N/.308Win cartridge into 2-3MOA all day long at 200 meters with LC Ball (1.5-2MOA with 168gr Match). It can effectively shoot cast bullets. It will accurately shoot the .32ACP cartridge out of a cartridge adapter for small game. It is about as compact as a hard hitting (1800 foot pounds at the muzzle), high capacity (20 and 30 round mags) fighting/survival weapon can be. It can fill any “Survival” roll without issues. 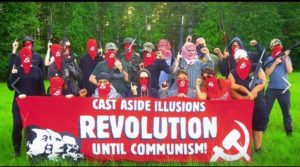 With that being said, if I am planning on standing alongside fellow residents of my neighborhood and community for the purpose being to combat the blight of communist insurgents (in groups like Burn Loot Murder [BLM], Antifa and the lesser minions of both) who are attacking American cities and neighborhoods, I will probably be using an AR or an AK. Look at the pics of different groups in this post. None of them show a “Standard” weapon for the fight they either are, or imagine that they are, in. 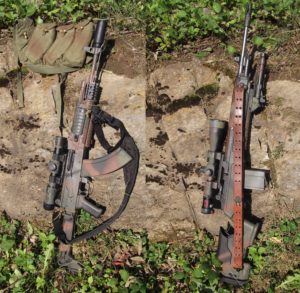 Standard type AKM with MagPul furniture on the left. M1A “Loaded” on the right.

What will make the decision for me? Simple, LOGISTICS. What are the people I’m with using? Although I’m not gonna get a .308Win AR, due to the issues which have plagued that system for decades, I have no qualms with using a 5.56 caliber AR or a 7.62S caliber AKM rifle in a fight.

I carried an M4 type AR in actual combat and know it works, even in the harsh climate of the desert. The AK’s rep for reliability is well known and not disputed in rifles that are put together correctly. I have a lot of trigger time on both rifles, so that’s not an issue. Finally, I knew the day might come where I need to use one or the other, so I have laid in a lot of supplies for both.

Being in the middle of a fight and running out of ammo is “No Bueno” (for God’s Sake, carry plenty of ammo). Running out of ammo and not being able to get more from your fellow fighter is well…. a “fight stopper”! I’m not discussing pistols here, because if you plan on relying on your “Self Defense First Aid Kit” as a primary defender in a fight you knew you were going to be in, you have more issues than what caliber you’ll choose. A pistol’s purposes are “Convenience”, “Fighting your way to a long gun” and as a “Back Up to your long gun”.

Yeah, I’d still take my 11″ FAL if I was leaving for good and could only take one sling carried weapon, but all things being equal (nothing is equal in life, everything is a trade off), in this fight I’ll more than likely be using my 11.5″ AR, (because that is probably what the neighbors are bringing). It has some of the best attributes for a “Fighting Weapon”. it is accurate (.75 to 1.5MOA at 200 meters). The 77gr OTM bullet I use is an effective “man stopping” cartridge. It is lightweight, ergonomic and compact.

If you don’t have more than one rifle, fine, bring what you’ve got. The most important attribute to have, regarding your weapon, is knowing how to effectively use it. If you do have the ability to choose, use good judgement, and don’t let your “Love” for a certain system or weapon be the reason you choose to carry it.

There’s a quote I read a long time ago that goes like this, “‘Amateurs study tactics, armchair generals study strategy, but professionals study logistics.”. Those “Dick Act” reforms came about, primarily due to the logistic failures of the Spanish-American War and they swept the army in the decade before World War I.

I “Love” my FAL, and I “Like” my AR and AK. I choose to make my decisions concerning what to carry in a fight, based on the realistic needs of combat and what constitutes the best, all around, “Fighting” weapon, not on what would be the best overall “Survival” weapon. In my mind, a “Survival Weapon” can cover a very broad range of tasks, and do them well, and this includes “fighting”. The Fighting Weapon” is more “laser focused” on a specific, “Fighting” application, and the logistics of the group you’re with should play a large roll in it’s selection. 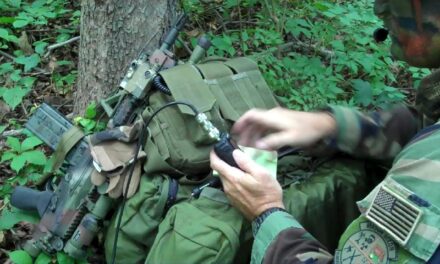 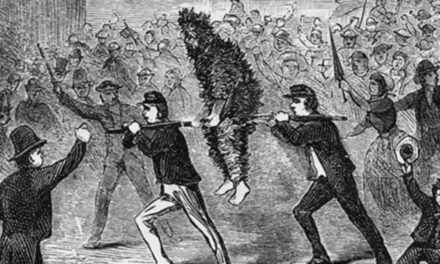