Hunting From An Elevated Stand

I mostly hunted deer and bear from a ground stand for decades. Been relatively successful on deer however the bear never seems to walk buy during bear season. For several seasons I hunted from a climb stand a Summit viper. Then one season I went to my climber at O’ dark 30 to find the cable cut and the climber gone. Back to ground hunting again.

Ground hunting I used a Eastman Undertaker pop-up blind unavailable at this writing. If you can find one or two, buy them. They are awesome. Along with the pop up blind, I would build ground blinds in the summer with available vegetation. By center-fire rifle season the first week of December, they were part of the forest. Often if I wanted I could reach out and touch passing deer.

Several years ago, I wanted to hunt an area of our property that overlooks a power-line that runs south for a mile, east and west a couple hundred yards, and behind me a small patch of nasty briers. The challenge was getting up above the brush level to see deer and bear. It was time to build an elevated blind. 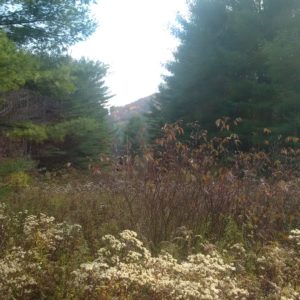 Looking south at ground level along a mile of power lines

First, I looked at buying a factory made solid walled elevated blind but the cost was prohibitive. In my neck of the woods they were starting at around $1,000- and going on up to $1,600 for what I really wanted. The decision was to build one.

First, I stopped by my local hardware store that sold the elevated hard sided blind that I really wanted buy tape measure and pad & paper. I drew the blind and then measured everything out. Sat in the truck to figure out my buy list and then went into the hardware store and ordered the supplies needed for the blind to be delivered to the cabin.

Once home I went online and found exactly what I was looking for, 4×4 elevated brackets for elevated blinds and play houses. 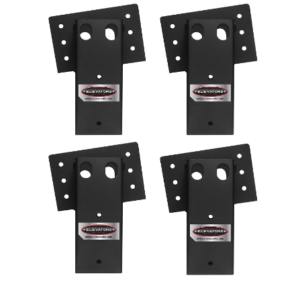 The total cost for the lumber, fasteners, hinges, and brackets was under $500-.

A level location in my yard was found and the floor was begun. The size was going to be 4 x 8 feet with a slopping roof 6-feet in the front and 5-feet in the back. There was going to be five shooting windows. One for the front (South 1-mile over look) and each side (east & west with 100-yard overlook) plus two in the back on either side of the door (looking into a brier infested swampy area). 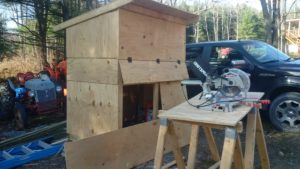 Once completed the bare wood did not look very natural so in a last ditch effort, I took some camo spray paint to the walls of the stand. I might as not bothered as the dry plywood soaked up most of the paint. Another lesson learned.

To move the stand, I asked help from my neighbor and his 95-HP New Holland tractor. We took off the tractors front bucket and installed forklift forks. He picked up the stand with the forks and off to the top of the power lines with me following in my orange steed with the rest of the parts – 4″x4″x8′ weather treated posts, chain saw, screws and screw gun, bolts, rigging wire, et cetera.

Once on the site I laid gravel down where the four posts holding the stand up would go. Then my neighbor lifted the stand platform as high as the forks would go and I inserted the four 4″x4″x8′ posts. Screwed them in place at the purchased corner brackets and my neighbor set the stand down. The elevated stand tilted a bit to the east, so we cut off a few inches of the posts on the west side.

Now level I sank one 4-foot long length of rebar on the east side and one on the west. These lengths of rebar I hooked up wire rope attached to a turnbuckle and snugged everything down each as extra protection in case the elevated stand wanted to tip over with me in it. 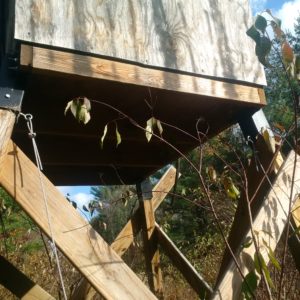 Once that was done, I put on cross bars between the posts.

Last I built stairs from the ground to the back door of the stand. 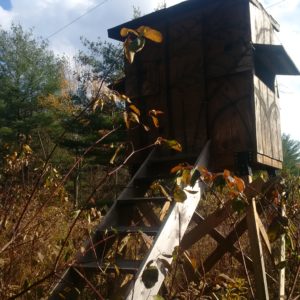 The end result was a great two-man elevated deer stand for under $500-. Since it is usually just me in the stand, I added a small side table a folding camp chair, and yes a propane heater. Although I have the heater, I never use it as the fan is noisy as all get out on the heater but it is there. To keep things quiet, I also put down a hank of carpet. 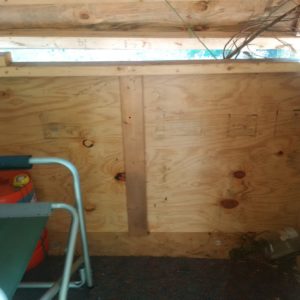 Looking south from the back door

Now I see deer, mostly does, going back and forth across the power line all day long. I typically do not harvest a doe anymore mostly looking for antlers BUT with the troubles coming I may put a few in the freezer this year.