My Wife was telling me last night, how ironic it was to see all the King Biden (you will never hear me refer to him as the “President”) supporters she knew on social media, lamenting about the decisions that the “King” has made. Decisions regarding the bombings in Syria, dropping the “Raise the minimum wage to $15” guarantee, and the “promised” $2,000 stimulus checks, cuz, “COVID” are apparently all out the window and have them all crying “Foul”.
These are the same types who called us crazy when we watched the President Trump election win get hijacked by a “Deep State” cabal of the usual Communist suspects. On most social platforms, they censured our thoughts about that stolen election and made sure that anyone purporting that the election was stolen was deemed “Crazy”, obviously a supporter of racism, and an enemy of our “Democracy”. 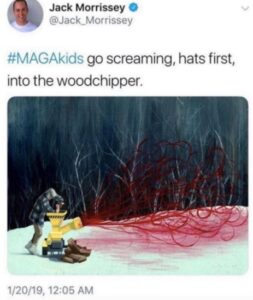 A Disney Lawyer’s take on what to do with our children.

These are the same people who have and are calling us crazy “Domestic Terrorists” and “Insurrectionists” after the January 6th protest. If we say the election was rigged now, they want to have you charged, incarcerated or worse, killed outright as a terrorist. I know people who were in DC at that time, and calling the action at the Capitol building a “Breach”, like it was some military type of operation,  just makes me laugh.
I’ve seen a breach done in the context of what happens in combat operations. THAT WAS NOT A “BREACH”! What happened in the Capitol reminds me of what happens in combat training when you’re too close to shoot someone safely with blanks. You say “Safety Kill” and the “enemy” is then “dead”. Maybe those “Insurrectionists” that were at the entrances said, “Safety Breach” to the cops who opened the doors.
Another thing the “Insurrectionists” didn’t have were Arms. Insurrections do not happen in a vacuum. A primary requirement of an “Insurrectionist” would be the means to enforce their will on those being “Insurrected” LOL! Firearms are a prerequisite for an insurrection, whether to end the existence of those you mean to overthrow, or force them to step down due to a fear of being “ended”. 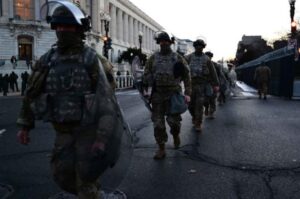 And how many troops are still in DC due to the famous January 6th “Breach”?

These are the same people who called us crazy, when we wanted more done to stop the violence (Being perpetrated by Communists and their misguided minions) throughout the Summer and across the Nation. “Mostly peaceful” was the term used by the Malicious Shit Media (MSM) to describe the violence being committed on a daily basis. When a teenager actually stepped up to help, and was forced into a true, “Do or Die” situation, they try to make him out to be everything bad, including a racist. Thankfully, he smoked two criminals and hobbled a third without losing his life.
These are the same people who have called us crazy for owning firearms for the protection of our loved ones and ourselves. Many of them are now buying the same firearms they decried as “Unnecessary” and “Having no civilian purpose”. I have no sympathy for an adult in their mid twenties or older who did not already have these means for their protection, and cry about not being able to find what they need now, or getting charged 3 times the price as a year ago, whether firearms or ammo.
These are the same people who hated President Trump so much, they voted for a geriatric, dementia infected, child sniffing, decades deep-corrupt politician and his sidekick, who’s known for being a literal whore (I’d imagine in her circles, saying “she sucks” is a compliment), just to keep Trump from keeping the Presidency.
These are the same people who believed the “15 days to flatten the curve” BS we were fed 352 days ago. By the way, what will you be doing on March 15th, AKA, “Flatten the Curve” Day? How are those masks working out? Here, let’s make you wear two, just to be safe. You’ve been vaccinated….right? If not, why not? Don’t wanna alter your mRNA with a drug that Bill Gates had a hand in getting produced? You know, the Non medical computer nerd who couldn’t even protect his own Windows 95 product from a virus or fix it after the fact.
There is a storm coming that will blow away many preconceived notions about apocalypse. Whether we are first hit by a monetary collapse, a World War or a Civil War, no one knows. Those in charge of the Federal Government now, are pushing to crush anyone who was or is a Trump supporter, or a supporter of the Rule of Law, via the U.S. Constitution. Also, King Biden is supporting and helping China the Nation that owns him. He’s giving them the “Keys to the Kingdom”.
I didn’t support Trump, the man, I supported the decisions he was making that were Pro America. He made some missteps, but his record was pretty stellar, all things considering. Too many are “Stuck on Trump” (you know he’ll be back in the White House by March….right?), and I believe that is an error in judgement. He could have made some decisions that would have stomped the riots over the Summer and crushed the election theft in the Fall. He didn’t, why? There would have been some serious casualties if he’d done that, but guess what, this is a war with Communism, and people die in War.
Our Communist enemies are showing their hand more now than ever before. TAKE NOTES! Get together with your family, friends and neighbors to develop a network for preparedness and protection throughout your area and the Nation. Prepare for hard times by putting up food, first-aid, defensive, commo and shelter supplies. Get training on how to use those supplies, whether it’s leaning how to can your meat and veggies, to treating a wound in short and long term, to use that radio or shooting your weapon in a tactical and non permissive environment.
Concerning the people I mentioned earlier, that called us “Crazy”, screw them! I used to want to help people out after they’d “Seen the light.”, but not those types and not anymore. We’ve been way to accepting and way to accommodating and all while playing by the rules. They will be the first ones to turn you in or kill you and take your stuff after the fan starts spinning faster. They took the easy “hand-out” route, and now they’re gonna reap it like everyone else. the difference being, you and I have prepared for this eventuality, they have not. Just like the Communists who mean to destroy us, they get no quarter.
JCD