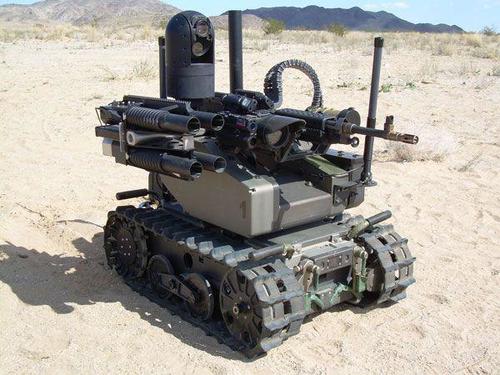 The weight of the LRWS is only 70 pounds versus CROWS of 350. This makes it small enough to be mounted on a Foster-Miller TALON ground robot. The new system includes various sensors such as a camera, thermal imaging, and laser range finder. The LRWS supports a machinegun or a sniper rifle.
The document further said the LRWS is a “man-in-the-loop” system is controlled by a human operator rather than artificial intelligence.

“LRWS transitioned to US Special Operations Command (USSOCOM) for immediate force protection of SOF operators while conducting the operational evaluation of the prototype units and will subsequently be available to all operators within the USSOCOM.”

“This suggests that Special Forces acquired the new remote weapon systems and are using them on unmanned vehicles for Force Protection, such as guarding a base perimeter,” said Forbes.
A SOCOM spokesperson said that the document “does not explicitly specify the vehicle SOF operators are using while assessing the prototype station in question.”
But, more or less, what’s important here is that SOCOM is already fielding armed robots on the modern battlefield.
The US Army is quickly developing and fielding light, medium, and heavy robotic combat vehicles to prepare for future combat as part of a rapid modernization effort.
Earlier this year, the service took delivery of two Robotic Combat Vehicle-Light unmanned ground vehicle prototypes (RCV-Ls).
What comes next is autonomous weaponry and how a line of code will decide what to kill.
[My comment: armed robots will be used in “domestic war on extremism” scenarios instead of sending human SWAT teams door to door. And there is no technological impediment to running them autonomously by AI instead of using a remote human operator. Running them autonomously will put the kill-no kill decision in the hands of distant bureaucrats who program the robots, instead of human LEOs or FLEAs on the scene, reducing potential moral hesitation and future guilt complexes.]
Zerohedge Link

About the Author: Matt Bracken