This was as of 11:30am on 3/14/2020. I went in not really planning on getting things and walked out spending $184. Go figure. But it was very interesting to see what went and what did not at this point. People seem to have emphasis on milk and meat despite the fact that 1) milk does not last long, and 2) I doubt most have enough freezer room (luckily the first major purchase I made after moving to my current AO was a chest freezer for that exact reason). Most of my purchases were things you wouldn’t think of at first – V8, powdered Gatorade, and comfort foods like chocolate. There was FINALLY evidence of the OTC medicine going – the big bottles of Moltrin were gone, as was a lot of Tylenol. I picked up a few last minute food, beverage and drug purchases and split. chatting up a clerk, they said it was an absolute madhouse in the morning. When I arrived, it was busy, but two things stuck out: 1) only one of the three entrances were unlocked, and 2) there were ropes leading people there, suggesting a rush that they wanted to control.

Given that my job is moving towards a “Work from Home” for at least the next two weeks, this was probably one of the last forays out into the public realm. I will probably go tomorrow to fill up my five 5-gallon gas cans and exchange my propane containers and then move towards an isolation on Monday (unless I run out of beer, of course). My better half still works in an interaction-with-the-public job, but that is the only disease vector we face. Ironically, she is currently dealing with a 24 hour stomach bug with the exact opposite symptoms of COVID-19 – nausea, no fever, no cough – but is currently sleeping it off. 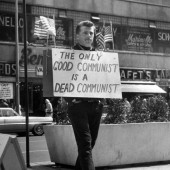