Chinese Military Airfield in Texas: Coming to Theater of Operations Near You

You saw our other piece on AP relating to the recent revelations concerning the Chinese purchase of 200 square miles in Texas.

https://www.popularmechanics.com/military/aviation/g23303922/china-copycat-air-force/
Popular Mechanics does good work. I am glad to see they mentioned the backstabbing in the 1980’s by our greatest ally. A common theme that will never end. As many of you are aware, China has stolen the designs for most of the western worlds military equipment and cloned these designs. The entire Sino military is a direct copy of the U.S. Military. From the top down. With a few adjustments for range, endurance, or capacity based on the most likely area of combat. Which begins in the Pacific and Africa.
https://en.wikipedia.org/wiki/Xi%27an_Y-20
This is the Chinese Clone of the C-17 pictured above. Very quickly, they will have the logistical means to conquer the world. Which is their stated goal using Unrestricted Warfare. But there is more to conquering the world than just military aircraft, which I will touch on at the end of this article.
Read this excerpt from Wiki concerning the construction of the Y-20, and their other aircraft systems.

“The Y-20 is the first cargo aircraft to use 3D printing technology to speed up its development and to lower its manufacturing cost. Model-based definition (MBD) is also used, and it’s the third aircraft to utilize MBD technology in the world, after Airbus A380 (2000) and Boeing 787 (2005). A project team to implement MBD for the Y-20 program was formally formed in October 2009, and after the initial success in application on the main landing gear, MBD application was expanded to the entire aircraft and became mandatory for all contractors and sub contractors of the Y-20 program. The implementation of MBD was initially met with strong resistance, with only a third of suppliers agreeing to implement MBD. However, the general designer of Y-20 declared that those who refused to implement MBD will be banned from participating in the Y-20 program, thus forcing everyone to comply, resulting in increases in productivity. The implementation of MBD greatly shortened the time required, for example, without MBD, installation of wings takes a month or two, but with MBD adopted, the time is drastically shortened to just a few hours, and in general, the design work reduced by 40%, preparation for production reduced by 75%, and manufacturing cycle reduced by 30%” 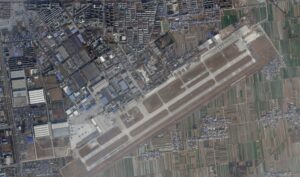 Picture borrowed from “The Drive”.

Look at that production facility! The MBD tech allows them to build an aircraft in hours compared to previous methods that took MONTHS.
Think about that. The process is hundreds of times faster than previous methods.
We, the U.S., no longer makes strategic lift aircraft. Which is absolutely unbelievable. (Link Inside)
Luckily, we can use citizen airfreight services. And most of our fleet is slated to be operational for the next 10-15 years. So not all hope is lost. We could, in theory, rebuild our mothballed fleet in the boneyards.
https://www.thedrive.com/the-war-zone/37939/chinas-y-20-transport-appears-to-be-finally-flying-with-indigenous-jet-engines
I would assume the only thing slowing down their production is a lack of trained pilots, aviation gear, and powertrains. The engines and lightweight glass instruments appear to be slowing production down the most. China has no shortage of men and women smart and motivated enough to fly.
ttps://www.thedrive.com/the-war-zone/31667/a-whopping-20-y-20-airlifters-seen-at-chinese-aircraft-plant-and-test-base
The runways in Texas are already big enough to land most commercial and private aircraft, and the dirt runway could handle a Chinese-130 and Chinese-130J clone; No problem at all. The Juliet craft is a smaller, lighter, less maintenance intense version of the larger craft. They are designed to fit into smaller spaces; Taking up less hanger and runway space and they do less damage to the runway when fully loaded. There are also other considerations, like range.
They require less infrastructural considerations, which is the most important. Like a Helicopter, they have more options for landings and takeoff.
Heavy equipment strategic aircraft require reinforced concrete runways. Which is a piece of intelligence we need to know. (Runway Pavement Loading PDF)
If this is for Light Sport Aircraft or the larger Gulfstream styles of private aircraft, then the civil engineering spec’s for the construction of the runways would be normal.
There are light, half sized versions of strategic logistic transport aircraft, and the reason is they are more efficient on fuel, less maintenance considerations, and they require less runway considerations.
This is an example of the bird the C-27J. Commonly called a C-130 “Juliet”. Though it technically isn’t a C-130J. This is the Chinese Version of the same concept. The Xian Y-7
On average, based on my research, a propeller prop aircraft of all classes, needs about 3,000 feet of runway. These runways are long enough by a large margin(50% larger). And reportedly have been already been expanded.
China is building lightweight tanks to compensate for their less powerful engines. https://www.americanpartisan.org/2021/05/latest-chinese-tank-ztq-15-light-tank/ 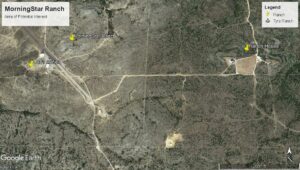 This airfield in Texas is perfect for landing troops and equipment. Remote, isolated, with an excellent view in all directions. 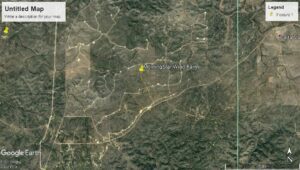 This wind farm is an interesting topic. Because, as noted in an interview we previously posted with the Epoch Times. There is very little wind. So why build a Windfarm?
A tax scam?
Tying into the grid?
I think the reason is a little more tactical than that. Though the other reasons are certainly correct. How do you target anti-aircraft and aircraft systems when the area is surrounded by errant radar targeting information from spinning windmills? That would require an on-ground tactical team to laser targets for direct attack against Chinese defenses for a decisive strike.
Which is easier said than done. But can be done.
Or, how do you target composite construction aircraft that are made of essentially the same composites as the wind turbine blades? Sounds like a stealth shield to me(Concealment and cover if you will). Adding concealment and confusion to the area.
Do you see how complicated this road system is? Have fun navigating that in the dark under night vision. Looks like they are preparing to place AA, Radar, and SAM sites on these pads. Which require massive amounts of electrical power.
But the real question… Where is the supplemental airport. There is a second one somewhere in Texas. I HIGHLY doubt this is the only one. Airports come in pairs.
This conversation is pointless unless we understand how the CCP really works. Their Commercial Jets are the real military threat. Which westerners have trouble understanding. The CCP shipping companies are no different than the CCP navy. And the Airforce and Commercial Air companies are the same.

Let’s talk about the real aviation threat from China.

This is the real threat. Not the Military Aircraft. This is how they will colonize the world.

We are helping them conquer and destroy us.

The Future Linked Below.

About the Author: Johnny Paratrooper