Recently I attended a three-day class entitled “Ground Intelligence Collection” facilitated by NC Scout and the field portion was outdoors. Do I have to add that the weather just had to join the conspiracy against us and add some realism – snow. There are a couple of ways to deal with this type of issue – speed and/or shelter. I am going to address the speed aspect in this short article.

The purpose of the exercise was to discover what frequencies the OPFOR were using and then quickly transition into the next phase – passive monitoring, recording or disruption. Since FRS is divided into twenty-two channels and covers 5.1625MHz of bandwidth and GMRS is across 32 different frequencies covering 5.1750MHz of bandwidth a couple of tools come to mind.

The device needs to be portable to be used in the field so this rules out industrial spectrum analyzers. One solution is the “Close-Call” feature found on many scanners coupled with a suitable antenna. To optimize this configuration a field transportable yagi antenna can add sensitivity to the direction being scanned and also help block strong near-field sign sources.

Another approach – and preferred by the author – is the use of an SDR radio with a laptop. Using this approach it adds full spectrum coverage and visual indication in the event that the target jumps channels to avoid being heard. With the GNU public general license available SDR+ software and any of several SDR devices you are good to go!

Looking to have a system that fits into a backpack or gym bag I chose a couple of portable antennas – the Diamond D220R discone rated 100-1600MHz and a log periodic Kent Electronics 400-1000MHz.

Mounting the Kent log periodic antenna was done via a camouflage, water-repellent cover my industrious wife designed and sewed together. It allows the antenna to be mounted vertically with it’s sleeve to a 15mm carbon fiber or wood dowel. Additionally, the tripod is configured with a “SmallRig” cheese plate with dual 15mm rod clamps that the antenna can be mounted to horizontally.

The Diamond D220R is mounted on a standard, one inch PVC tube base connected together to be broken down into four pieces. The only modifications were the addition of end caps to keep water out, and small cut to allow the antenna lead wire with SMA connector to come out the side.

The Diamond D220R on PVC travel base painted olive drab. 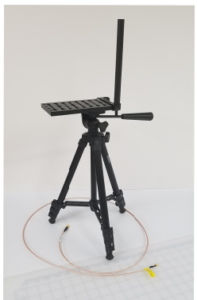 Here is the complete rig with antenna mounted: 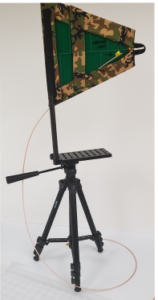 For the SDR receiver I was an early adopter of the AirSpy products. The AirSpyR2 is my “go to” choice for its wide-bandwidth and spectrum coverage. Connected via its included USB cable and attached to either of these small and covert antennas you can monitor the radio spectrum from 24-1,700MHz.

Here is a spectrum display example: 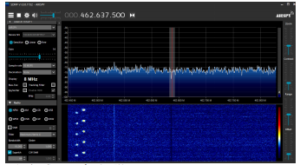 The red line is the tuned mid-frequency of the FRS band. The high-end of the frequency band is clearly
in sight as well – all 462MHz channels are in one display.

33G20 started his career as a SP5 in the Army Security Agency in the 1970’s. Trained as a 33G20 electronic Warfare/Direction Finding Systems repairman he graduated from AIT after 14 months from Fort Devens, Mass. After working on AN/FLR-9, TRD-15 Autotune and CEFIRM Leader systems he has enjoyed a career as a system engineer till this day. Today his interested are in OSINT, SDR and being prepared. 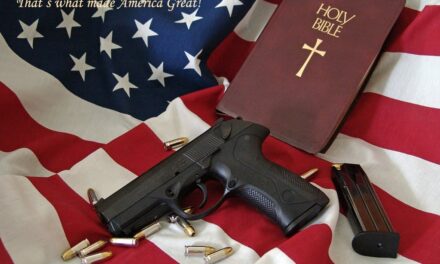 Evolution of a Sinner, by JDAR15 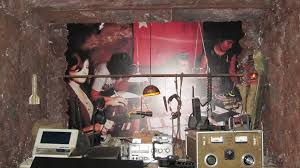 A Quick and Dirty Guide To Pirate Radio