Epoch Times: How The Specter of Communism Is Ruling Our World 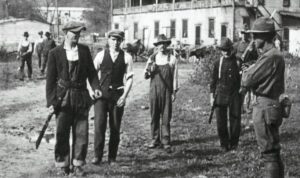 Yesterday I had the opportunity to stumble upon an extremely insightful show by Epoch Times called, How The Specter of Communism Is Ruling Our World. The episode I watched, and most pertinent to the United States was, “Infiltrating the West”. As you’ll see in this episode, all the actions we see are no random acts that has culminated into a “perfect storm”. It is a planned infiltration of Communism into the United States and has been moving forward for about 100 years.

The movement was seen during the 1910’s & 1920’s in rural West Virginia during the Coal Mine Wars where the idea of Communism was appealing to extremely poor workers living in harsh conditions. The appeal of better working conditions and better wages were certainly in order and opened the door to Communist ideology. This appealed to my own grandfather since he was a worker in the coalfields and from an entire family of coal miners.  He delivered the Daily Worker newspaper to fellow coal workers so, no doubt, my grandfather and his own brother bought in on the philosophy of Marx & Lenin.  He even bestowed my father with the middle name of Lenin.

I have linked the episodes of most  interest to the movement in the United States.  As you watch this, you’ll see that it has been an elaborate plan to eliminate borders, divide the people into classes of victims, overload the welfare system, and infiltrate the universities & government.

“The only way you can get your rights is with a high powered rifle!”

– From a speech given by Frank Keeney, President of District 17 United Mine Workers of America at the capitol grounds in Charleston, West Virginia.

About the Author: Holy Serf