Good morning. Here’s your Daily Situational Awareness briefing for Wednesday, 11 August 2021. You can receive this daily intel brief by signing up at https://forwardobserver.com/daily-sa

SITUATIONAL AWARENESS
LITHUANIA: The tiny Baltic nation is drawing the ire of China for opening a Taiwanese diplomatic office in Vilnius. China recalled its ambassador and is urging Lithuania to do the same. The Chinese state-run Global Times published an op-ed from its current head, Hu Xijin. “It is rare to see small countries like Lithuania that specifically seek to worsen relations with major powers,” Hu wrote. The paper also said Lithuania would “eventually pay the price for its evil deed of breaking international rules.” (Analyst Comment: This is the information arm of a tightening China-Russia partnership. China is expected to become more involved in Eastern European politics as a result. Russia is suspected of facilitating refugee movement through Belarus to Lithuania to destabilize their borders. – D.M.)
CONGRESS: In a Dear Colleague letter to Democrats, House Majority Leader Steny Hoyer (D-MD) said Congress will return on 23 August — four weeks earlier than previously planned to vote on the $3.5 trillion budget bill and the John Lewis Voting Rights Act. The separate $3.5 trillion “human infrastructure” bill has yet to be written but will likely pass through the same reconciliation process if this current measure succeeds. (AC: Democrats appear to be passing as much spending as possible before debt limit negotiations occur at the end of September. The debt limit is not mentioned in the budget, indicating the increase will be tied to a last minute continuing resolution to fund the government past 30 September. – D.M.)
FBI: During an election security conference, the Department of Justice Election Task Force Deputy Chief John Keller said the FBI will take a more active role in investigating threats against election officials. Their efforts will include “knock and talk” visits from FBI agents, regardless of prosecutability. The FBI’s liaison to the Task Force said he agrees with this approach and knows that “two tough looking FBI guys showing up” and questioning citizens about social media posts will create an environment of fear in those social circles. (AC: This was communicated to election officials from across the country. False reporting could be used to either hamstring local FBI investigations or to actively suppress political dissent. – D.M.)
PAINT: Paint, ink, label and adhesive manufacturers are struggling to meet demand. Domestic mechanical issues, overseas explosions and fires, and force majeure declarations across the market are leading to shortages of acrylic acid and its derivatives. The material shortages appeared manageable as demand declined in 2020, however, increased global demand in 2021 quickly overwhelmed capacity. Phil Phillips of Chemark Consulting believes demand from India and China “intensified the level of shortages and led to significant price increases for raw materials.” (AC: Dow Chemical is circulating confidential supply chain analysis among purchasers to assist in price increase planning, which is ongoing for everything using paint, inks or adhesives. Some paint supply stores are reporting unfilled commercial orders due to lack of acrylic. – D.M.)

HAZARDS WARNING
HURRICANE SEASON: Tropical Storm Fred formed overnight and continues heading west around 20 mph. The storm is expected to impact Florida as early as Friday in the Keys. The National Hurricane Center warns of flooding impacts, mudslides and high winds. The greatest flood impacts are projected for eastern and southern Puerto Rico. 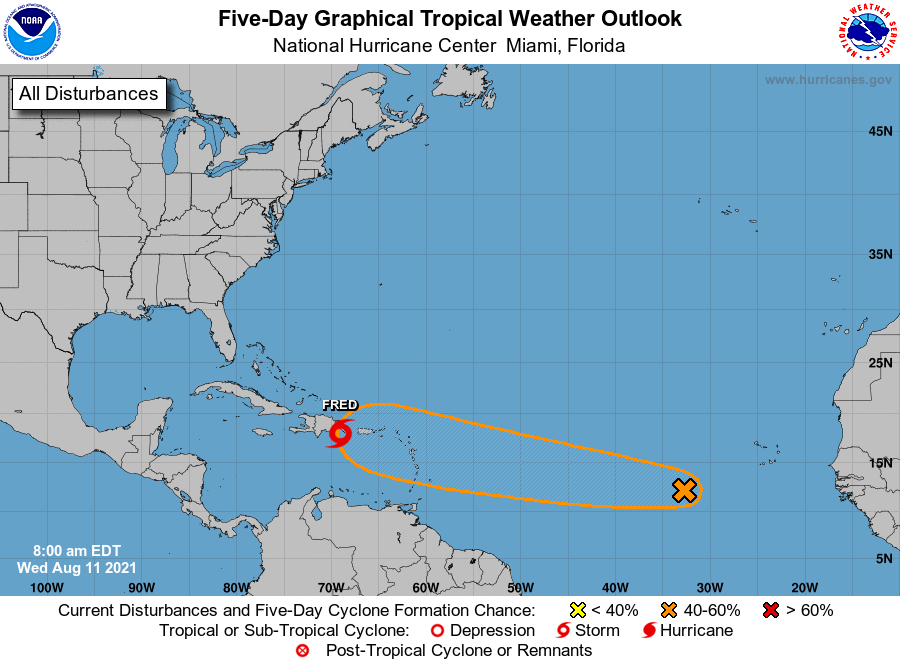