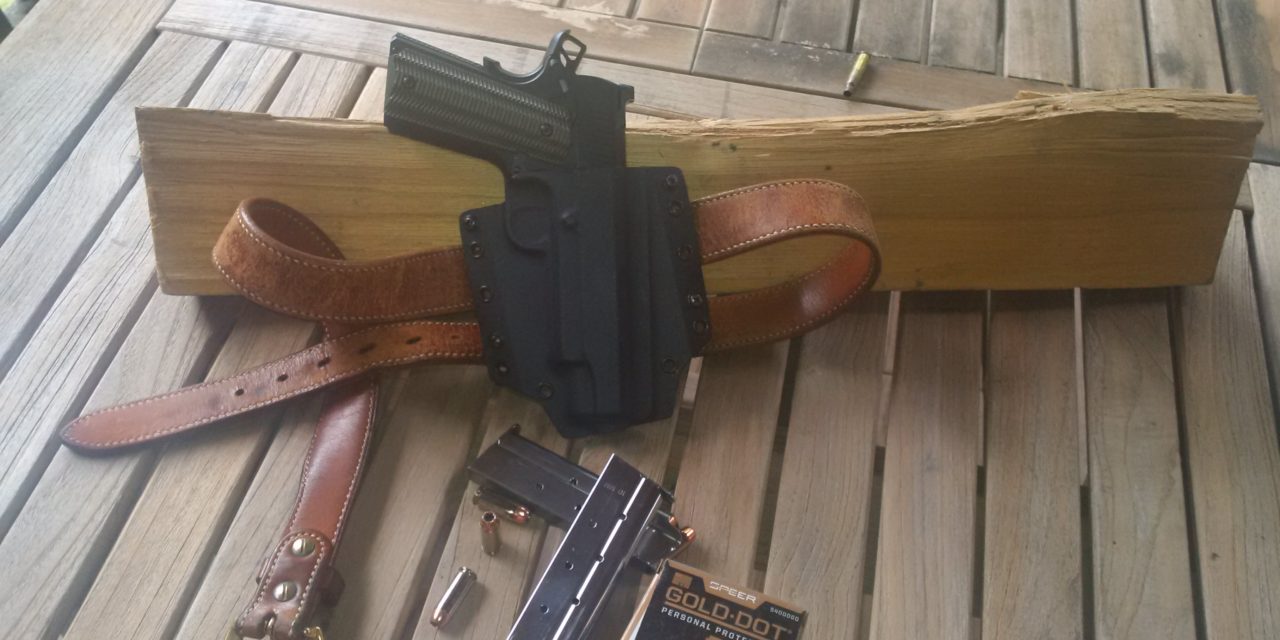 On a beautiful May morning five-years ago found me in our 1,800 sf garden getting ready for planting our vegetable seedlings for the up and coming summer growing months. It is MrsMac and my goal to harvest about 80% of the veggies we eat in a year during this period.  As I was working away I heard some branches breaking and I looked over towards the woods that our garden butts up against. Not seeing anything I went back to my task at hand when again I heard branches snapping so I went over to investigate. About 5-yards before I walked into the woods I spotted movement about 10-yards up in a tree. At about that time I heard a very deep throated growl emanating from the woods to my right. As shivers went down my spine it all came together before my eyes. The thing climbing the tree was a black bear cub and mama must have been close and was warning me or telling her wayward cub to get down. Either way, I did not want to exchange pleasantries with mama so I quickly backed up into the garden and with a renewed skip in my gait made my way back to the cabin about 75-yards away.

That Sunday after the church service I saw our local Game Warden (Bernie Sanders fans call them Environmental Police) helping himself to church coffee so I sauntered up next to him and exchanged pleasantries. Once we were caught up on the past weeks doings, I told him about my experience with one of the local bears and he said, “I hope you were carrying at least a handgun.” I replied in the negative which got a “stinky eye” look not unlike my Mom use to give me when I went off the reservation in public. By that time a group of men had gathered loaded with donuts and coffee listening to our exchange and of course then tell their encounter (s) of the third kind with bears, coyotes, and mountain lions.

To make a long story short, from that day on I started wearing my Kimber 1911, .45 ACP while working in the garden and carrying a 12-gauge shot gun loaded with slugs when off on a trek about the property.

About a year ago I read an article on the stop-ability of the 10mm Vs. .45 ACP round in tests conducted by the FBI. Not long after that I heard that Springfield-Armory manufactured a 1911 in 10mm and my interest grew. Here is a comparison of the two rounds: 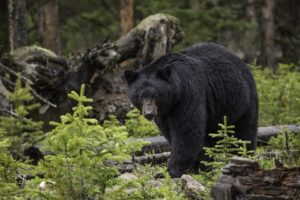 The black bears where I live typically go up to 650-pounds for a nice boar and around 450-pounds for a nice sized sow. Taking that into account obviously the 10mm is a better round if I wanted to carry a semi-auto pistol in a 1911 configuration which I did. Of course, I could even get superior performance if I rolled my own. Armed with this information (pun intended) I ordered a Springfield – Armory, 1911 TRP from my friendly FFL dealer.

The handgun arrived a month ago. It came in a gun range case, with two 8-round stainless steel magazines sealed within a heavy card board box. Once home, I read the take down directions and promptly dismantled the handgun to make sure things were clean and lubed. Reassembled the handgun and checked out the trigger pull weight. Using a Lyman trigger gauge the average trigger pull after five snaps was 4-pounds, 3-ounces. Nice! Then off to the local ammo dealer to buy several boxes of Speer 200-grain Gold Dot 10mm ammunition. I would have preferred 200-grain FMJ but that is all they offered. My bear load for the .45 ACP is alternating FMJ with hollow point ammo.

Once home I loaded up some magazines and got out one of my Galco 1911 holsters that I use for my Kimber 1911 or Browning Hi-Power handgun. Well the Springfield-Armory 1911 TRP would not fit the holster. What I forgot was the handgun had a partial rail for a light or laser. This made it slightly taller than your average 1911. Went on line and ordered a Bravo Concealment holster for the handgun. As a side note, I like Bravo Concealment holsters because the folks who work at the company are so friendly and accommodating; their holsters are tough and well made with the final attribute being the Scotsman that I am – The prices are very fair. Ordered it on Tuesday and received the holster on Friday. One day before I was expecting it. Maybe I should add to the above attributes – Bravo Concealment under promises but over delivers. The holster fit the handgun like a glove. 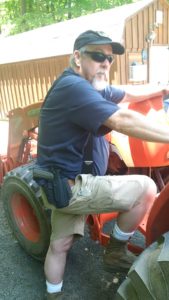 With the holster in and ammo purchased it was time to try the handgun out.

First, I shot the handgun from a rest at 10-meters from the target. The handgun shot low but grouped well. 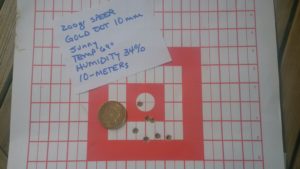 After the first magazine run, the slide did not remain open post the last round. I thought it may have been the sandbag I was using interfered with the action so I loaded another mag and shot not using the sandbag. As before the slide did not remain open when the last round was fired. I field stripped the handgun and re-oiled all of Springfield-Armory’s recommended spots but used more oil then recommended. Reassembled the handgun and back off to the range. Loaded a magazine and lit off 8-rounds as fast as I could pull that trigger. This time and for the rest of the test shoot of 100-rounds the slide always remained open after the last bullet was flung down range. Lesson learned, the 1911 TRP liked to be run wet…At least in the beginning during the break-in period. 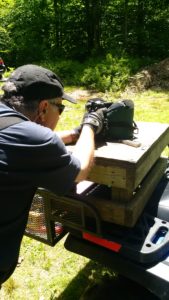 Improvised bench rest on the back of four-wheeler

The G10 VZ Grips® are great. Better than the grips that came with my Kimber I might add. I shot the handgun bare handed and with gloves and I have to admit that wearing gloves gave me tighter groups. Keep in mind when you compare rounds, 10mm Vs. .45 ACP, the 10mm round will wake you up for sure. A good friend of mine is a retired Pennsylvania State Trooper and recently found us ragchewing on our respective HF transceivers. He told me that he had just purchased the Glock G20 Gen-4 which meant I had to brag on my newly purchased Springfield-Armory TRP in the same caliber. Reviews commenced on our new 10mm acquisitions and we both agreed in the end that 10mm was a “snappy round.”

Once we were done shooting at paper we went on to more fun targets like; clay pigeons, steel gongs and some water filled bottles. I will say she was a fun pistol to shoot even though the recoil was a bit “snappy”. Consequently, it took a bit longer to get back on target Vs. the .45 ACP round; However, I will take that willingly into the wilds for the extra punch the 10mm gives. 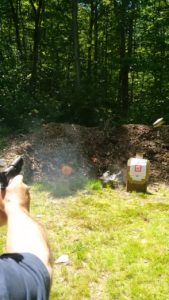 Having some fun with water filled plastic bottles

Now my Kimber has been promoted to a “safe queen” and will only be used as my EDC when the snow starts to fall. After all, I must keep it looking nice and pretty as my brother had me put into my last will & testament that it goes to him upon my departure of this plane. 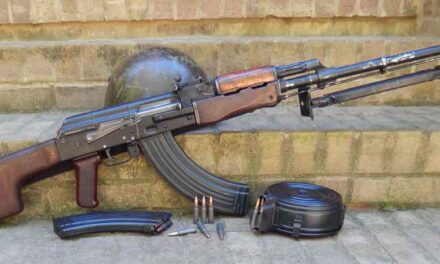 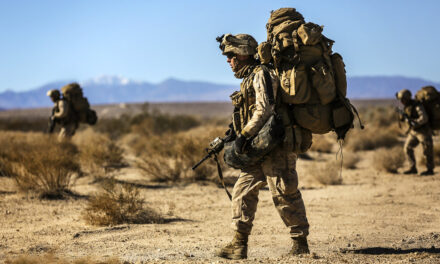 Priorities of Purchase; Progressively Building a Rifleman’s Kit on a Budget 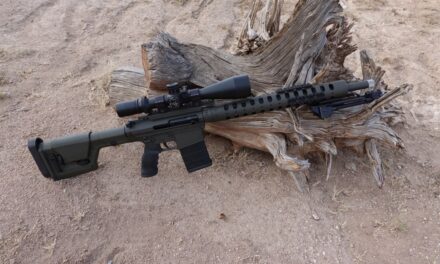