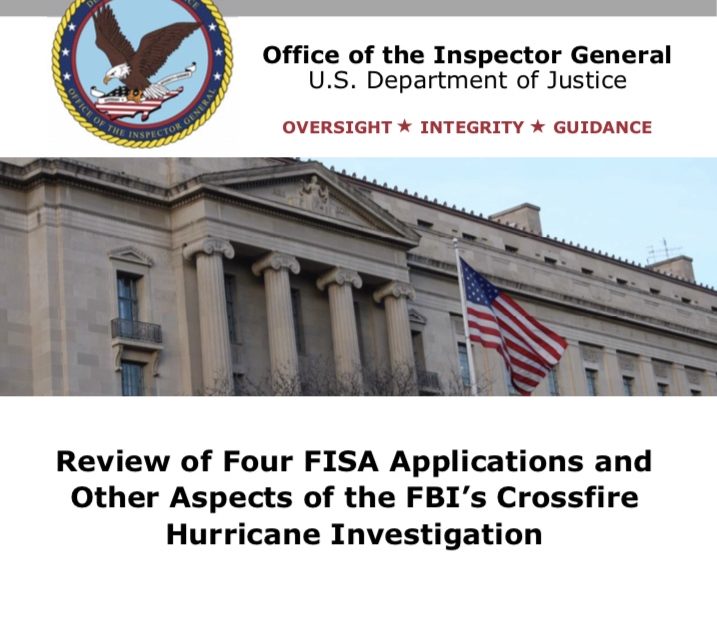 On December 11, the Department of Justice (DOJ) Office of the Inspector General (OIG) released a long awaited report reviewing the four FISA court applications that launched the FBI investigation against members of Donald Trump’s presidential campaign. The report is 480 pages long, more than most people are going to bother reading, so it would be great if there was someone willing to read it and summarize and explain some of the important parts of the report. Well, here I am. For reference, here is the report itself.

Before I get started on that, let me first say that the infamous “Steele Dossier” is mentioned regularly in the OIG report. This is the dossier that was used by the FBI to convince the FISA courts that they had a good reason to start investigating members of the Trump campaign (despite the fact that they themselves had already decided they had enough reason, and had begun doing so as they wished, including with the use of electronic surveillance techniques). In February of last year, I wrote a piece breaking down every part of the six page memo from Representative Devin Nunes that was written about the Steele Dossier. The OIG report states that the FBI lied when they told the courts that the Steele Dossier had been corroborated and and had already been used in some criminal cases. I suppose the courts neglected to verify this? As the Nunes memo stated, and as I explained in my prior piece on that memo, the Dossier was written by Steele, then info was leaked by Steele to Yahoo News, and then Steele used that news report to corroborate the Dossier, an incestuous ring of evidence corroborating itself. I encourage you to read that short piece here.

Now that you’ve gotten acquainted with the Steele Dossier’s dubious origin story and it’s crucial nature to the spying the FBI conducted on Trump’s campaign, let’s move on to this past Wednesday’s OIG report reviewing the FBI’s four FISA applications in the so called “Crossfire Hurricane” investigation (CHI) that was launched against members of the campaign. This report seems to have concluded that there was rampant fraudulent behavior by the FBI surrounding the CHI from the start. On top of using a dossier that FBI agents knew to be highly politically motivated, they were discovered to have been outright lying to the FISA courts, concealing evidence, cherry-picking documents.

Early in the report, it’s stated that at one point, a friendly foreign government (FFG) had reported that a Trump official, George Papadopoulos, had told them that Russia had stated they may “anonymously” release information related to Hillary Clinton’s campaign. The report states that no other information was gathered or used to open the investigation against this particular official, with the goal of finding out if the official was a “witting” source or participant. The report is quoted to say “We did not find information in FBI or Department ECs, emails, or other documents, or through witness testimony, indicating that any information other than the FFG information was relied upon to predicate the opening of the Crossfire Hurricane investigation.” In my opinion, based on my past professional interactions with both witting and unwitting “participants”, this is abnormal behavior of a witting participant and not indicative of any sort of wrongdoing by the official. Also in my past experiences, high ranking officials that frequently interact with FFGs are commonly cooperating directly with CIA officers for regular debriefing communications. You’ll notice that this is specifically the case with another Trump campaign official, Carter Page. I would be surprised if it wasn’t also the case with Papadopoulos. Any US government official that has dealings with any foreign official at any level is worth a look as a witting debriefing source, if nothing else.

Speaking of Page, it appears in chapter five of the report that the FBI intentionally omitted the fact that Carter Page was an operational contact for the CIA and had been in frequent contact with them, exchanging information regarding his connections and dealings with Russian entities, including Russian intelligence collectors. They appear to have used his contact with those entities as a lever to open the investigation on him, despite the fact that he was known to the FBI as a witting source of the CIA for information on those dealings. Are you beginning to see how the world of strategic (as opposed to tactical) intelligence works?

Touching on the insanely fraudulent Steele Dossier, the OIG report’s executive summary notes that the FBI was granted a warrant to conduct electronic surveillance against Carter Page based on the dossier and nothing else. However, the report says as well that the FBI was already conducting warrantless “electronic surveillance targeting Page, which is among the most sensitive and intrusive investigative techniques.” That is on page V of the summary. Also of note, the foreign intelligence agency Chris Steele had worked for is redacted, but as far as we know, he was with British intelligence. He had a history of doing intelligence reporting on corruption at FIFA, as if we needed an intel agency to tell us that FIFA was corrupt.

On pages VIII and IX you’ll see a reference to a “source characterization statement” (SCS). This is a portion of an intelligence information report (IIR) that allows the writer to tell you a short something about the source’s validity and reliability while still maintaining your source’s anonymity, which is highly important. Divulging a source identity can get people killed and/or landed in prison. The FBI failed firstly to write a true SCS. The one they wrote was a lie, because none of Steele’s reporting had ever been used in any criminal cases. Secondly, the FBI agents involved never gained approval from Steele’s handler to write this. A source’s primary handler is the person to speak to when you need to write the SCS for an IIR based entirely on reporting from that source, because they’ll know best you can and can not write in order to maintain anonymity. This is Fort Huachuca schoolhouse level bullshittery. The OIG report states that Steele’s handler testified that (s)he would not have signed off on the SCS the way the FBI had written it.

The FBI failed (intentionally?) to do any sort of source deconfliction in this case with regards to Chris Steele. When I was in Korea, I worked at the G2X. “G” is division level, the “2” is the intelligence section, the “X” is the office that manages HUMINT operations at the “G” level. Part of what we did was deconflict sources, basically in order to make sure sources weren’t being used by multiple handlers, or feeding everyone different info, or the same info repeated over and over for multiple gains, or other such things. As opposed to “G” level, the FBI should have gone to “J” level, which is the joint level, at the top. This is where you get the CIA, DIA, the Army and Navy, NSA, FBI, Geospatial intel, the NRO, so and so forth, all working under the same intelligence umbrella. The “joint” umbrella. The J2X or some entity handling J2X-type operations, if it was ever involved, should have been able to fix that deconfliction problem. Is this pertinent ground level info for the partisan? In detail, not likely. But it shows that your FBI isn’t nearly operating the way it’s supposed to be, even down to basic intelligence reporting and source handling.

Page IX also gives a clear picture that the FBI conducted interviews with Page (mutually agreed upon to be recorded), and then cherry-picked the statements that supported their preconceived views and omitted any mitigating statements and inaccuracies in their reporting. When the FBI requested warrant renewals (three times) these errors were repeated. Page XI tells us that Steele was not even correctly reporting information provided by his sub-sources, and that additional reporting by Steele was already being given to the Clinton campaign for their use. The Nunes memo detailed how money originated with the Clinton campaign, was routed through at least two intermediaries (because that’s how our betters handle payments) and ended up with Steele to the tune of at least $160k.

Steele was being paid in other ways as well, as summarized at the end of page XI, where the FBI omitted the fact that Steele was being paid to discuss his knowledge with the media, and that Steele himself “was desperate that Donald Trump not get elected and was passionate about him not being the U.S. President.” What ruling would the FISA courts have made if all of the above information was made available to them?

If you read my link above to the Nunes memo, you’ll see a high level of connection between that memo and the OIG report. The Democrat Party is not coming out of this report looking particular healthy in regards to the impeachment/conviction process. Perhaps impeachment is a foregone conclusion since the Democrats absolutely have the votes to get it done today if they want it, but I feel acquittal in the Republican-controlled Senate next month is going to keep Trump in the White House. This OIG report has surely weakened the Democrat Party position, or in a sane world, it would.

I highly recommend that you read the executive summary of this report at the very least. The FBI is the flagship of the “deep state” and is not going to be easily uprooted. What we see detailed in this report and the events of the past three years represent nothing less than a real-deal, banana republic coup attempt spearheaded by the likes of Andrew McCabe, James Comey Peter Strzok (CHI lead), Lisa Page (liaison between CHI and McCabe), Chris Steele (a foreign intelligence agent who was paid indirectly by the Clinton campaign), among many others. We see evidence of this by reading pages 66 through 69 in chapter three.

I’ll be monitoring the comments section below if anyone has any questions, as I continue to read through this large report. The next couple of weeks are going to be interesting, as will the 2020 Presidential campaign. 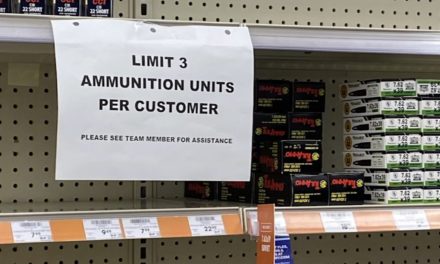 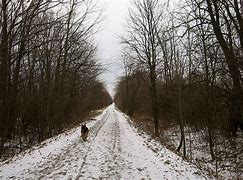 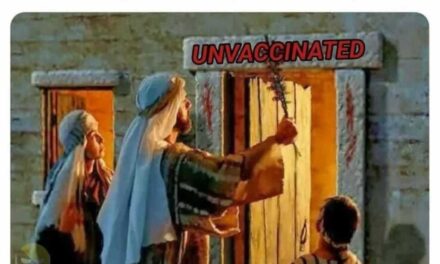 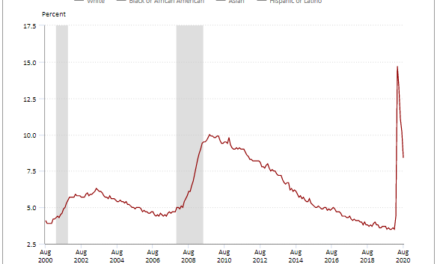