…the White House has been put on lockdown, and that according to NBC sources, beginning tomorrow, a “non-scalable” fence will be erected to secure the WH complex, Ellipse and Lafayette Square with 250 National Guardsmen on standby…

And now, it seems that Wall Street is also starting to freak out: in a note by AGF Investments’ Chief US Policy Strategist Greg Valliere, he wrote that the “threat of post-election violence has been a dominant topic in virtually every investor briefing we’ve done this fall,” but he’d “never raised the topic of violence — until now.”

Valliere said he was “stunned to see much of the city boarded up” while driving through downtown Washington over the weekend, and flagged disruptions in Portland, Ore., and elsewhere.

“In a country this angry – and armed to the teeth – we worry that an inconclusive election could unleash conflict,”

In a hint that violence may indeed be coming, Biden’s Campaign Manager Jen O’Malley Dillon said that “under no scenario will Donald Trump be declared a victor on election night” confirming that there is no condition under which Biden would concede tomorrow.

“President Trump believes that if he wins the East Coast battleground states, Florida, North Carolina and Georgia, he plans to go out and declare victory, and we want to be clear with you if he tries to do that that will not be true.”

“We Worry About Armed Conflict”: Investors Are Suddenly Freaking Out About Post-Election Violence – Zero Hedge

The aging hippies and Karen coalition that are somehow still allowed to vote are in for a rather rude awakening in the next few days. I am entirely envious of the people lucky and sufficiently amoral to sell the seed corn of future generations for double digit returns on their retirement during the China uber alles days of the 80’s and 90’s. I only kid, I don’t know how those people sleep at night, and I most certainly hope they do not die a natural death. In pleasant news, the fact that a huge number of people are ready to kill their fellow Americans over competing and irreconcilable political differences has finally penetrated the board rooms of Wall Street and soon those monthly checks getting sent to Boca Raton. 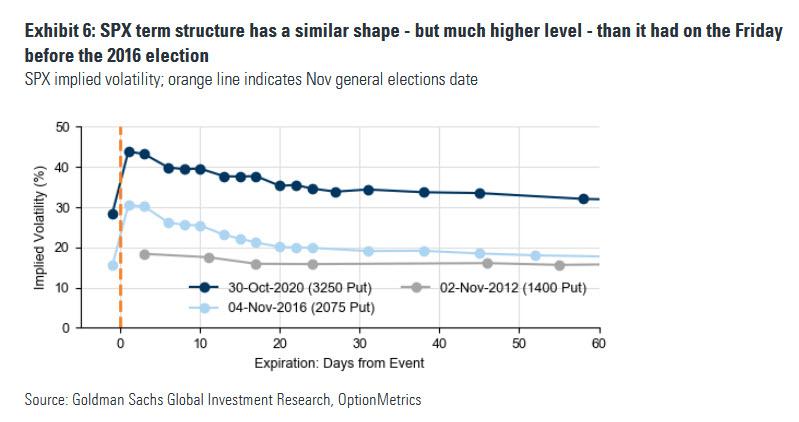 The Volatility Index (VIX) for tomorrow was off the charts months ago. Adding fuel to the fire is the certainty that a Joe Biden election will result in large swaths of the country being shut down if someone tests positive for COVID-19. The upside is that this financial ruin will not simply extend to the under-50 unwashed masses but is likely to create such overvaluations that most mutual funds and investment vehicles are going to take very real, and very serious losses. Your solace should be that most of you who read this site are young enough to still pull a trigger if you have to and still recover financially. The added benefit will be the angry lefties that thought you could shut down an economy and just stay home forever being forced to work as ‘essential’ workers  and face more exposure to the scary virus than they would have had if the economy hadn’t been destroyed. It’s easy to avoid people when you have a retirement. It’s more difficult when eating gets in the way and you have to show up to work at Wal-Mart for the foreseeable future. All polemics aside, Wall Street is taking notice and BLM is bad for business. While the #Resist sticker on the Mercedes is so cliche, the fact remains that a shutdown of our energy sector and rolling shutdowns of retail, tourism and service industries is going to make that lease hard to pay. If both sides start shooting, even pockets of isolated violence are enough to cause significant financial turmoil as investors price turmoil and property destruction into price valuations. The entire country won’t be at war overnight, or even in the event of a civil war. However, the vast, vast majority of the country will be very poor even if it never sees urban fighting or troops. The US dollar is a method of exchange, the smart money is on the people trading it for useful things. Pro tip: if 2020 has taught us anything it’s that you can always find someone to buy or trade for small arms ammunition, green paper not so much. Time’s are changing.

About the Author: Jesse James