How to use Airsoft for Training

Now hold on, I can already hear the stampede of “It’s MILSIM bro!” guys rushing to fight the “useless toy guns!” crowd in the comments. I’d like to preface this article by saying that I don’t fall into either of these categories. I know better than to refer to the sport of playing airsoft as “MILSIM.” However, I also recognize that there is potential training value in these “toy guns.”

Strengths and weaknesses of airsoft guns

Before I go into how to use airsoft guns for training, we must first analyze what they can and cannot do. For a start, airsoft guns can be easily configured to be exact replicas of almost any firearm in the world (or in your gun safe). This allows you to “clone” your own guns so that you can build the same muscle memory with your airsoft gun as with your defensive firearms. The magazines are the same dimensions as the real thing too, so you can (and should) use your normal load-bearing gear to carry them. 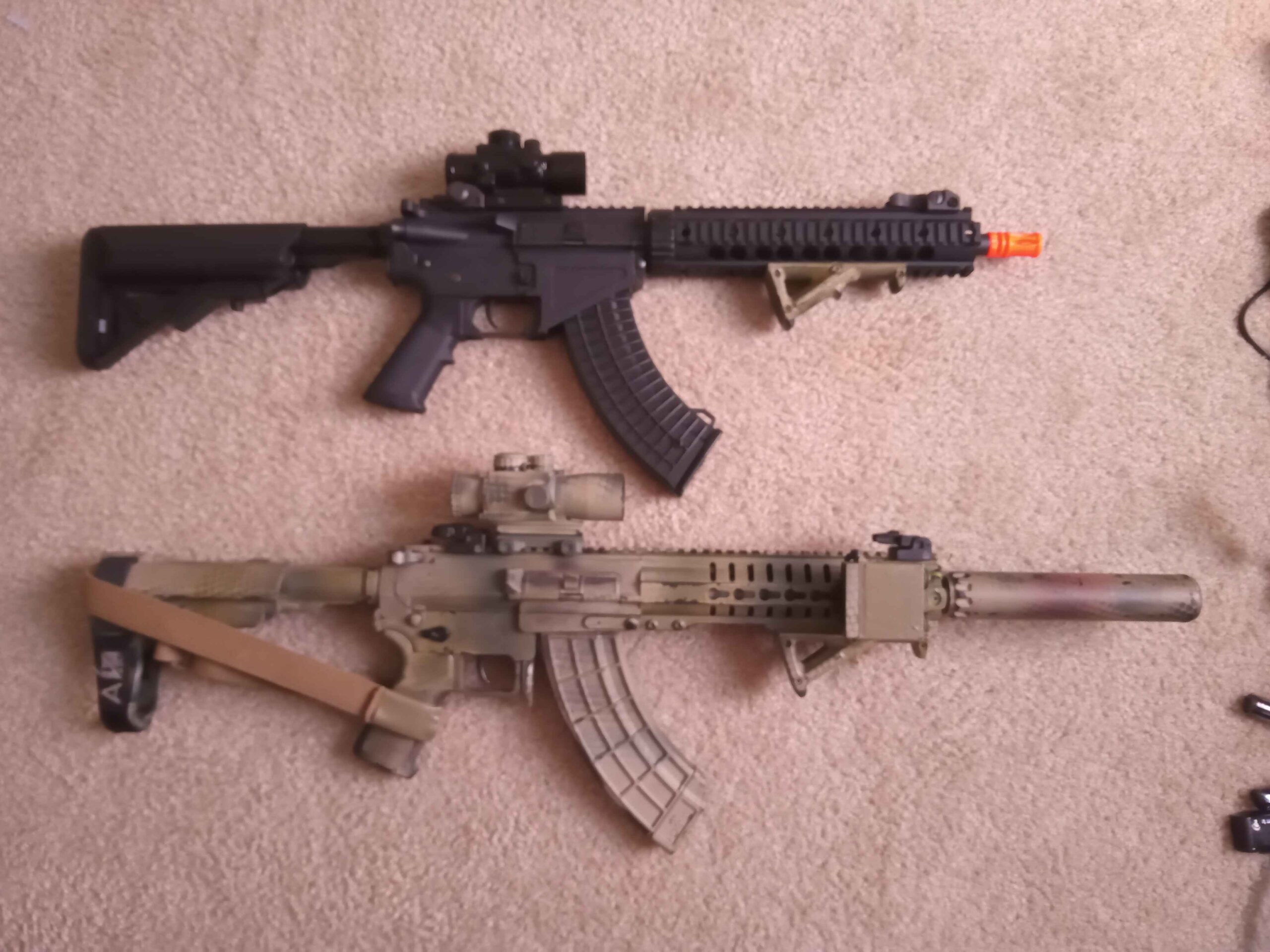 My Mk47 Mutant (bottom) and airsoft clone (top).  The foregrip is in the exact same place and they both have 3x optics with similar reticles, so I still get practice acquiring targets up close with the magnification.

Airsoft guns are also great for avoiding potential legal repurcussions of getting caught training with actual firearms in certain locations. For example, you and your teammates want to practice patrolling in the local forest and some Karen walking her poodle calls police on you because you look scary. Police show up and start asking questions about what you’re doing, and you can innocently say “we’re playing airsoft.” Just make sure that you don’t paint over the orange tips on your guns.

The best strength of airsoft guns is their utility for force-on-force training. You squeeze the trigger and a small plastic BB is fired at about 400fps which stings your opponent and lets him know that he is hit. I would argue that this is better for force-on-force than simply using blanks because you get to see what actually works and what gets you “killed.” You become more conscious of cover and concealment when there are painful consequenses for carelessness.

All that said, we must recognize that airsoft guns have some pretty hefty limitations on their realism. First of all, the maximum range of most airsoft guns is 100-200ft, which means that the force-on-force utility is limited to those ranges. Second, there are certain aspects of firing a real weapon (muzzle flash, sound, and recoil) that airsoft guns cannot mimic. And third, the fact that they shoot plastic BBs means that a lot of materials provide “cover” from airsoft guns that wouldn’t stop real bullets, creating the potential for training scars.

Now that we understand what this tool is capable of, I’ll provide some tips on how to employ it in your training.

Airsoft can be a potent training tool if used correctly. As long as you take into account its limitations and plan accordingly, you can get a lot of valuable training for very little monetary cost. A quality electric airsoft gun will run you about $150-$200 including batteries, magazines, and chargers. 5000 BBs costs $15-$20, so it’s extremely cheap once you get past the up front costs.

In the future, I plan to run Force-on-Force Labs through Von Steuben Training, so keep an eye out in the future for these realistic training exercises. If you want to learn how to coordinate and lead a team of shooters, join me in Ohio on December 11-12 for the next Team Leader Class. I look forward to training with you!