Note: this an adaptation from my non-fiction book Suburban Defense: A cop’s guide to protecting your home and neighborhood during riots, civil war, or SHTF. You can grab a copy here.

About the author: Don Shift is a veteran of the Ventura County (CA) Sheriff’s Office and is a student of emergency response, disasters, and history. He is the author of several post-apocalyptic survival novels.

A lot of us have given thought to independent operations, small-unit tactics, and guerilla warfare. One area I seem to notice that has been left out of discussion is riot/crowd control. 2020 was the year of the mass riot that made its way into residential neighborhoods. Sure, guns are cool and all but tactics consisting a two-position switch of “open carry” and “kill everybody” will not work for every situation.

You may need to face off with a riot or mob in a situation where lethal for is not permissible or advisable. Here are some considerations regarding riot/crowd control, some devices commercially available to the general public, and how they might be employed.

Goals of your anti-riot/anti-mob efforts

Your goals in any effort to keep riots or mobs from causing havoc in your neighborhood or on your street should be:

Before using force, consider the following:

Using force may not be the proper thing to do at that moment given the circumstances. One type of force may be better to use than another. This is not a decision to make reflexively or take lightly.

Here we’re discussing civilian legal (and easy to purchase for non-law enforcement people) grenades, mainly from the airsoft world. Odds are you won’t have fragmentation grenades (I pray we never get that far) or military/SWAT grade flashbangs.

Smoke grenades are available to civilians, but sourcing can be difficult. Military issue or civilian versions of military smoke grenades are hard to come by, but not impossible. The easiest sources are airsoft supply stores. Models that have about the same burn time and create a large smoke cloud, like military models, exist. For concealment usage, several grenades might need to be deployed due to small dispersal patterns or wind.

You aren’t going to get tear gas. Smoke grenades will work better if the crowd is stupid, panicky, and it helps if you yell “gas, gas, gas” before lobbing a white smoke (while you wear gas masks for psychological effect) and deploy pepper spray to dupe the unwary.

Also from the airsoft world are flashbangs. Flashbangs, also known as stun grenades or distraction devices, basically make a deafening boom and a bright flash of light to disorient and distract bad guys. Military/law enforcement models will not be sold to you, even if they are legal to possess.

Airsoft versions come in two models; CO2 and pyrotechnic. The CO2 models are basically a small BB gun CO2 cylinder in a grenade body. The gas expands a plastic “balloon” that pops very loudly. The pyrotechnic versions are basically firecrackers in a grenade shaped cardboard carton. These are louder and do produce something of a flash (nowhere near the brightness of a real one) and also blow apart the cardboard container. I would highly recommend this latter version.

Yes, you can use firecrackers and other fireworks based items, including smoke. I would advise against those as they need to be lit with a match or lighter versus most of the airsoft models that work like a regular grenade. Just pull the pin and toss.

37mm flare launchers resemble the slightly larger 40mm M203 grenade launcher (which is why California and other states ban them; they look scary). These launchers are not capable of firing grenades. Instead, they fire large marine flares or other ammunition.

One common type of cartridge is a pyrotechnic round under various names that is essentially a firework; a loud bang and lots of “stars.” A variation is a flashbang type that bangs and flashes, but without the star effect. Some just make noise. Smoke rockets are also available, allowing you to deploy smoke out to 50 yards, further than you can throw. Tear gas and baton rounds are not commonly available to the public (law enforcement only).

Pepper spray, also called oleoresin capsicum (OC in police parlance), is everyone’s favorite spicy spray. It burns when on your skin or in your eyes as if you splashed yourself with hot sauce or rubbed a very hot pepper on your face. When inhaled, it causes a burning sensation in the lungs, coughing, copious snot, and occasionally respiratory distress. Older chemical formulations that act in a similar fashion are “Mace” and CN sprays.

Your typical discount store “impulse shelf” purchase of a pocket or purse sized canister is worthless. Get a Mark III 1.5oz canister belt-sized can. Larger models exist up to the Mark IX “riot size” ones that come with a pistol grip, which you will recall from “bear Mace” products. Always buy OC that is formulated for humans, not bears. I would carry a Mark III or Mark IV canister on my body for limited use. For riot control, I would have several Mark IX canisters ready to douse the crowd.

Pepper spray grenades are basically aerosol cans like the handheld stuff, but with a valve that continuously sprays until the pressure supply is exhausted. These are unidirectional cone sprays. Once you press that button, it starts spraying until empty, usually for about 10-15 seconds. Though pepper spray grenades are often sold only to law enforcement, some suppliers are willing to sell them to the general public.

Paintball guns can be a good crowd control weapon. The balls not only hurt to get struck with, but I have been unable to find any instance of anyone dying or having lasting damage done. The worst I can imagine is hitting an eye directly and causing major trauma to it. Paint can be used to “mark” certain individuals. Frozen paintballs have been known to cause a lot more pain. Even pepper [spray] ball products are sold, though bulk pepper balls may only be sold to law enforcement.

Firing paintballs into a crowd could be a good way to cause pain to a crowd and startle them enough to leave the area without causing serious injury. Hoppers of paintball guns can hold hundreds of balls. Specific individuals can be targeted and repeatedly shot until they leave or stop doing whatever bad thing they are doing. Fire could be kept up for a long time with trigger discipline. 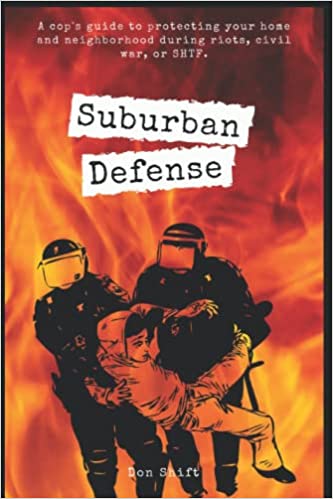 Bright lights work as non-lethal weapons by disorienting someone through temporarily blinding them and producing that deep sense of discomfort one gets when staring at the sun. Lights also have the advantage of aiding identification and denying the cover of darkness.[1]

When I say blinding lights, I mean super bright spotlights at close range, like millions of candlepower. The handheld spotlights that can produce truly blinding levels of light usually have to be connected to power, like a 12 volt socket. Of course, as a counter measure all someone has to do is close their eyes and turn their head, but the light can disorient someone.

Strobe flashlights can also be used to disorient people. You need to be close and it needs to be very dark for these things to have maximum effect.

Lasers are another good tool. The little red dot of a weapon laser can be a persuasive tool when you can shoot but don’t want to. To someone who sees the laser and doesn’t have a death wish, it is a picture in a thousand words moment warning them “back off or die.”

Wear a helmet of some sort to protect from thrown objects. A hard hat or bike helmet will do, but if it doesn’t have a chinstrap, it can be knocked off. Don’t forget ballistic rated eye protection. Consider that your enemy may be well-prepared with helmets, goggles, masks, face and handheld shields.

Shields can be used to protect from blows or flying objects when rescuing someone from the mob or when defensive activities require you to be in within range of thrown objects. You will not be using them to shove rioters except in an emergency, such as a rescue. The shields should be used by dedicated bearers to shelter a downed person or provide cover for weapon bearers against crowd-thrown objects. Not every man is going to, or should, have one. In the event you really need a shield, you should be taking shelter inside or returning fire (lethally or otherwise).

Makeshift riot shields can be made of plywood or OSB with the corners rounded down and a bin pull or other handle added. Sections of 55 gallon plastic barrels are also popular choices. Plexiglass is also sold by the sheet which can be made into a homemade shield. Proper use of shields should be learned and practiced; tutorials are available online.

Going hand-to-hand with anyone should be a last resort. Batons can be easily snatched away and used on you. Using clubs or other melee weapons are suited for physically fit, trained fighters. Hand-to-hand combat is essentially individual combat, but in numbers, and your side will probably be outnumbered. Also using melee type weapons will likely cause serious or fatal injuries.

[1] See SINCC under the section regarding flashlights, described in the “Firearms.”