America is now the land of More. More taxes, more regulations, more inflation all of which means YOU will have less. You can mitigate some of this unpleasant reality. This is an article I had planned for a while and this****** post by Johnnie Paratrooper spurred me to get it done. It was Founding Father, Benjamin Franklin who said in Poor Richards Almanac, “A penny saved is a penny earned” —but even better? It’s a penny that’s not taxed! One of the ways we can save a penny and often, much more, is in being more competent and willing to fix the things that we need versus simply buying new or having someone else do the work. This has the further advantage of likely sending fewer American dollars overseas. In decades past this was expected. Fathers, uncles, the Boy Scouts, 4H, school “shop” classes all served to give people the basic life skills needed to perform repairs of consumer items and home systems. Most every home had a workspace- the garage or basement or even a dedicated workshop where tools were kept and repairs made.

I own some rental homes; they are a part of my retirement strategy. The homes of course need regular maintenance and improvements from time to time and I do as much of it as I can myself. Here is an example of a small issue– this drawer is typical of the type of cabinetry available outside of high-end custom units these days-made of particle board and staples. Even if I was inclined to do so, trying to find a matching unit to buy would be nearly impossible and likely expensive. Which leaves fixing the exiting unit, either myself or hiring someone to do it. Hiring it done would be expensive and time consuming, it’s simply easier to fix it myself. Further, beyond fixing it, I decided to improve the drawer by using better materials and construction methods. Once the decision was made to fix it, I had to gather materials. Everything that I used to fix the drawer was salvaged materials with the exception of some wood glue. The new drawer “box” was made from 1×4 scraps left over from a window trim project. The bottom, face and roller track were re used from the original drawer. The partition material I added was scrap from an office remodel job. The screws I used were from my stash of such materials and larger than the originals. Other than materials I also needed tools of course. The project required a table saw, though a simple Skil saw could have been used for much of it, wood clamps and a drill for the screws and a measuring tape rounded out the list of equipment. In addition to using solid wood to build the box, the drawer was further improved by adding reinforcement to the bottom and with the addition of partitions which when tied into the box body offered further strength. I am not a carpenter; I shine a chair with my ass to make a living. But, the finished result is certainly adequate for a mid range rental home and it cost me about an hours’ worth of labor and nothing in materials. 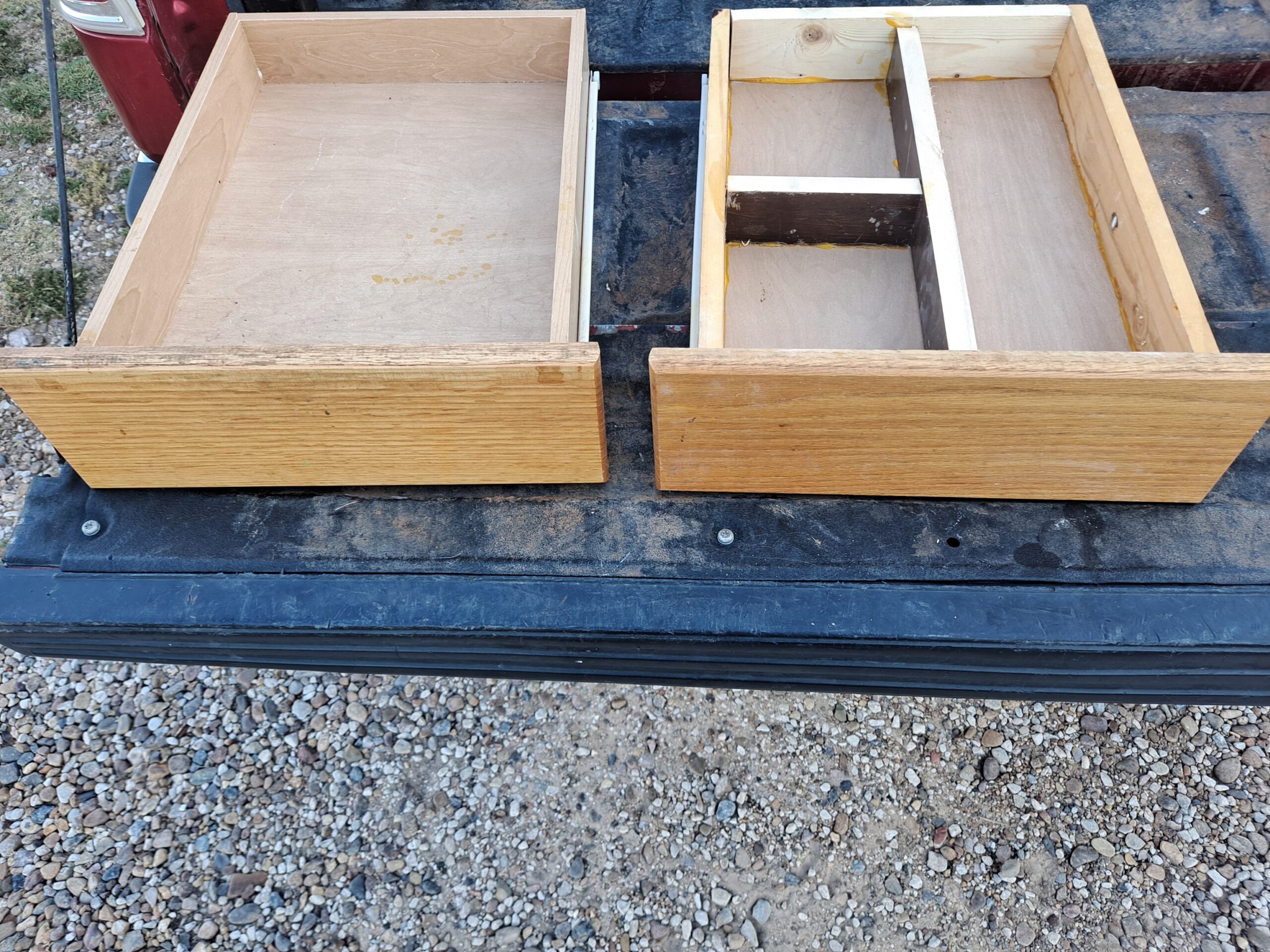 Another example- these light cover panels were originally made of extremely thin, clear plastic. Over time the plastic would yellow and get brittle and when replacing the light bulbs in the fixtures above them would often crack and break- another win for FookaYu Plastics Company and Home Depot. While driving down an alley awhile back I found several clothing store fixtures that had been set out by the dumpster. Each fixture was made of 3/8” Lexan. I heaved the units into my truck bed and disassembled them when I got home, salvaging a large pile of stainless steel bolts and nuts, several large sheets of high-quality Lexan and some casters. The idea came to me that I could cut the sheets of Lexan and use them as much sturdier replacements for the existing light covers- two of which were missing and I simply refused to replace- for the second time….A bit of research on Youtube showed that the best way to cut heavy Lexan was by simply using a standard wood cutting saw blade but TURNING IT BACKWARDS! A few measurements, 5 minutes in flipping the blade on my table saw and I was cutting the large sheets of plastic. I think the project turned out quite well and again, zero out of pocket cost. 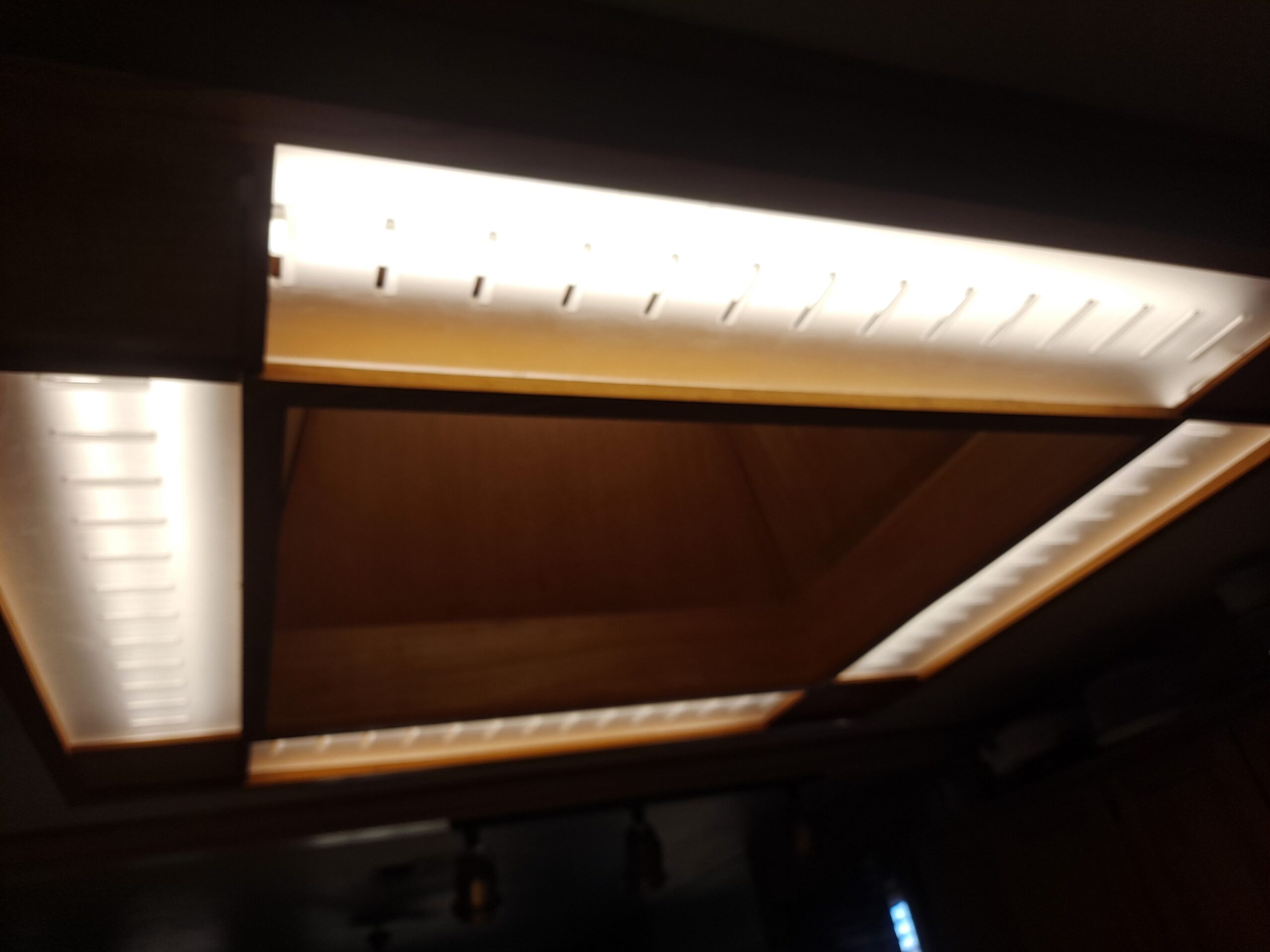 This project brings up some good points for those seeking to be more thrifty-opportunity and imagination. I could very easily have just driven by some “junk” store fixtures in an alley. But as soon as I saw them I knew they were full of valuable and useful materials that could be used for several projects. If you are going to be more independent you need to see opportunities to collect free or very low cost materials and capitalize on them. A note here- when you gather materials you need to have a way of storing them in an organized way. This is important for more than one reason- First, how many times have you said, “I know I have one of those…”..but couldn’t lay your hands on it? Materials are worthless if you have so much unorganized crap that you can’t find them. Second, and this is no small thing, organization creates fewer issues with spouses and in some cases, “the man”- Everyone knows the house on the block with the junk cars in the front yard and piles of pallets- don’t be that guy. Seeing the usefulness in “junk” is an acquired skill, the more you use salvaged materials, the more opportunities you will see in what others consider refuse. Story time. My uncle was a helicopter crew chief who served two tours in Vietnam. He said that when he first arrived “in country” and they would fly over villages the huts all had grass roofs. When he finished his second tour, most of the huts now had roofs made from Budweiser cans! The locals would pick the cans- made of steel in those days, out of the GI’s trash, cut out the top and bottom, cut them lengthwise, hammer them flat and make “shingles” out of them!

Final example. The Gerber/Fiskars hatchets are popular tools. The common knock on them is the plastic handle which cannot be replaced in the event it is broken. While I have never seen one that was broken, the one pictured below had its handle damaged in a fire. While it was still useable it was uncomfortable and reminded me of the moment of carelessness that had damaged it every time that I used it. After carefully assessing the handle, I decided that I could cut off the damaged portion leaving a short hollow section and with some careful wood working, create a handle that could be slid into the hollow and glued in place. The handle was cut with a hacksaw, maximizing the contact surface for the new handle, an old, broken shovel handle was cut to length and a drawknife and belt sander were used to contour the new handle to fit my hand and the hatchet. The plastic used in the original handle bonds very well with Super Glue, the glue actually melts it creating a very sticky, permanent, and secure bond. I emptied an entire tube of glue into the original handle stub, liberally coated the new handle with another tube and tapped it in place. The repair is quite sturdy after considerable use. Two tubes of Super Glue and a broken shovel handle returned the hatchet to a useful condition vs. the $30 a new one would have cost.

In times past Americans were more prone to fix things versus purchasing new items. While planned obsolescence is certainly a thing, many of the things we toss can be fixed. Don’t be afraid to try. If something is broken, what is the harm in trying to fix it? If you break it further, so what, it was going in the dumpster anyway! Don’t’ be afraid to fail, a willingness to fail is how we grow and learn things. Dave Ramsey built a successful business- and then went Bankrupt. The things he learned in that defeat have allowed him to build an even more successful business that has helped millions of people in the process. We only fail when we fail to learn from the experience. This isn’t some New Age Bullshit, it’s life. None of the jobs in this article turned out perfectly. The hatchet handle for example, if I had thought about it more, I would have made the new handle much prouder and butted it up against the edges of the old one providing a stronger handle. It would have been a simple thing to do requiring only a little extra measuring etc….Next Time……Yes, trying to fix some things may end up costing you more if you have to hire a pro to fix you attempt. That’s simply a cost of developing skill. A good example of that from my own experience was in attempting to replace some drum brakes several years ago. Despite watching a video on the process, I was able to get the job halfway done when I realized I just didn’t understand how to finish it. I had to tow the truck to my mechanic and rather sheepishly admit that I couldn’t get the job done. The mechanic was kind enough to SHOW me what needed to be done and how. It cost me some money for him to finish the job and some time in towing the vehicle in. But, it would have cost me to have him do it in the first place and now I know how to do it.

There may come a time when I don’t have the money to have someone else do the job or, I’m the only one around to do it—have you TRIED hiring someone lately? Over time you will gain skill and confidence- both commodities more valuable than money in many cases. Don’t dismiss the boost to your confidence- the more you do, the more you will be able to do and understand. Knowing that you have real skills, especially at a time when so many do not- (“In the land of the blind, the one eyed man is King!”)…. will give you peace of mind and as John Mosby subtitled his book, Forging the Hero- “Who does more, is worth more”.