After completing the Land Navigation class at the Green Dragon Academy, I decided to evaluate my state atlases. I decided to take a systematic approach to look at the design and production of each atlas that I own, with the intention of ranking them in order of personal preference. This review isn’t based on the geographical greatness of Texas, but on the construction, design, and content of the atlases.

All-in, the three atlases cost me around $100 total. That might be a little steep for someone wanting to upgrade their atlas collection, so I have ranked them in order of my personal preference, with hopes this helps with making a purchasing decision.

I purposely omitted accuracy as a determining factor in this review. I will consider the atlases as being accurate until shown otherwise. I don’t consider accuracy as being subjective, either the atlas is accurate, or it isn’t. For me, when I see an error, I’ll just make an ink correction and move on. These off-the-shelf atlases are pretty good products, but keep in mind, they are mass produced and aren’t perfect.

Here is the list of my three atlases, with my top pick being listed first.

The top choice is an atlas by MAPSCO. This actually isn’t my favorite, but it rises to the top because it works, is functional and has spiral binding. I dislike atlases without a spiral binding and consider that an important priority in selection. Anyone who has used a non-spiral bound atlas understands why this is so important; they don’t lay flat, they don’t fold at al,l and they fall apart with any semblance of use. The MAPSCO is spiral bound and hasn’t fallen apart after years of use. Again, this is my top choice until something better comes along.

The second-choice atlas is an atlas by DeLorme. I actually prefer the layout and content of this atlas because it has good color contrast, crisp wording and TONS of useful data. I have purchased and used this atlas for multiple states (such as Texas and North Carolina) and have always had positive results…except for the one critical design flaw; no spiral binding. I have used these atlases a lot and every single one has fallen apart. Every single one. For that reason alone, this atlas is second best. 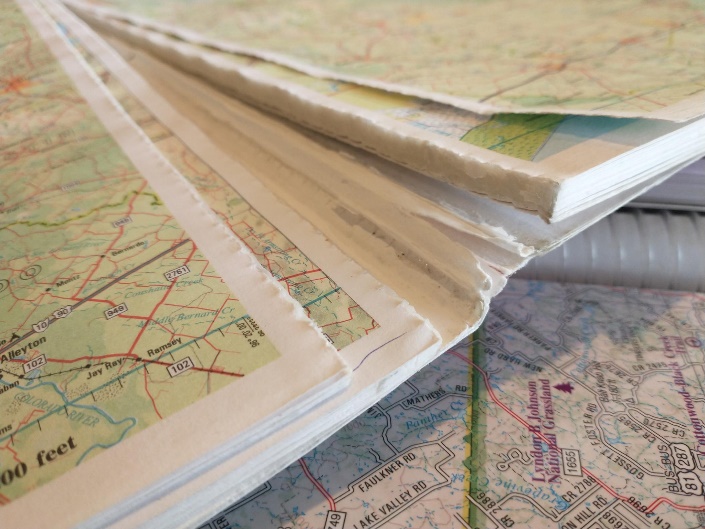 Last place is the Benchmark Maps atlas. I tried to like this one, but I couldn’t because the graphics and color selection were, at times, a struggle. The spiral binding is a nice touch, but then again, it just securely holds together an atlas that doesn’t work well for me. It is a good product, but not my top choice.

The cover page is durable, and the overall paper quality was solid. This atlas had spiral binding and has held up to a lot of highway miles. The color contrast is done right and there is just enough detail on the map to make it useful, but not too much to make it cluttered.

Located on the inside cover there is a large mileage chart with about 2000 different combination of available routes to take in Texas…very convenient.

I like that along the border of the map, the blue edge has small hash marks, that correlate with mileage. This has been super helpful when estimating mileage but be careful because the N/S hash marks are 5 miles while the E/W marks represent 6 miles.

Another plus is that the lat/long is written in red ink along the white margin. This is the only atlas to have this information in the margin, which makes it easy to quickly identify and reference. 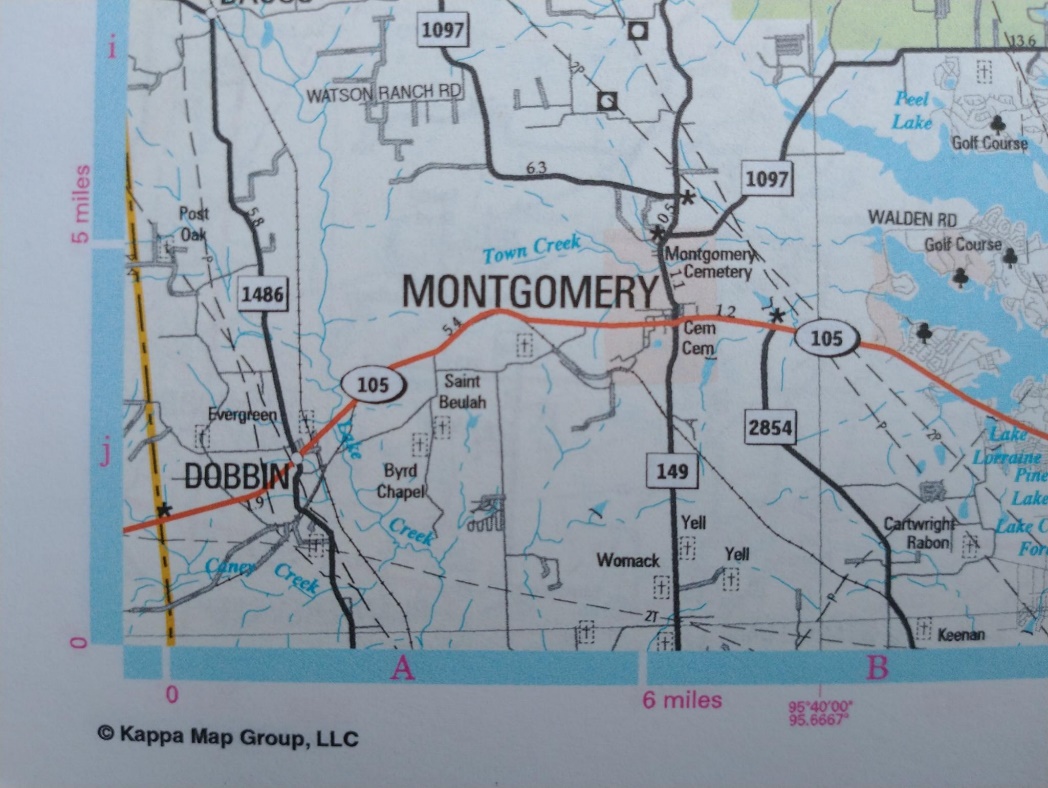 Unfortunately, the index on the inside front cover is a little small and it only takes up the top half of the page. It feels like they tried to cram every tiny symbol, color and note into an area only 8.5” by 4.5”.

There isn’t a date anywhere on the map to tell when it was printed. I have three of these different printings of this atlas and had to play detective to determine which one was the current version. I called the customer service number and they also thought it was odd. However, she confirmed that a lot of the state atlases have been printed over the years without a date.

If you want to know the production date on the MAPSCO highway atlas, the key is the UPC code and retail price. You can call customer service and after checking your UPC code, they can tell you when the map was printed and confirm if it is the latest version. (None of mine were the current edition, so this was a good check for me and I’ll be updating my atlases once again!)

Sturdy cover and robust paper that has held up to a lot of moisture and tough use. The major downside is the lack of spiral binding. This atlas doesn’t lay flat very easily and after a few uses, the map falls apart…on both the ones that I currently own and have previously owned. I really like this map because it has great content and the topographical info is really helpful, but in reality, the map has the fatal flaw of falling apart. There simply is no telling when a page will fall out or blow away in a gust of wind. Who likes trying to keep 160 pages of a large map in order? No one. And this is a big deal for me. 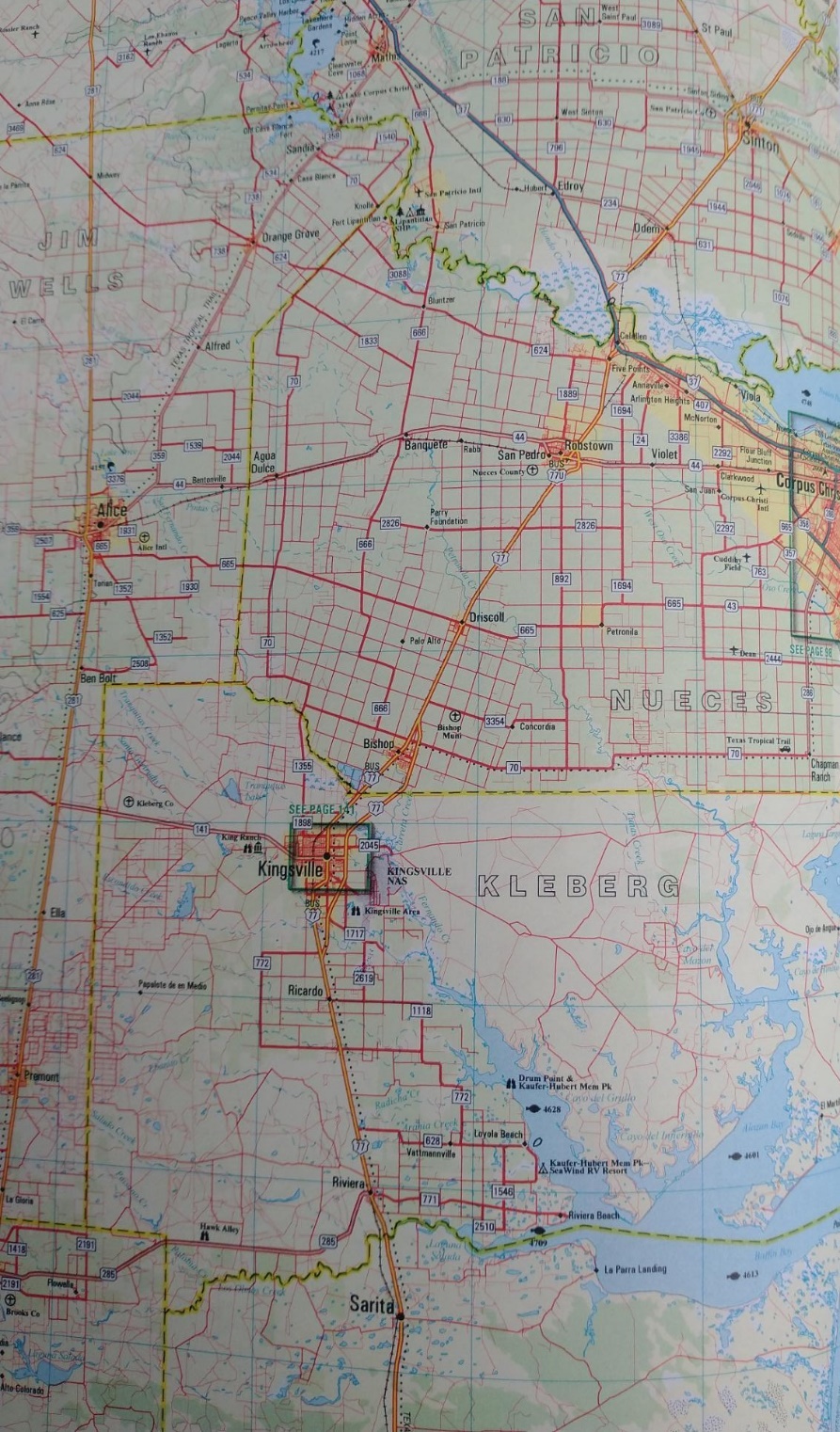 Sturdy cover and robust paper that has held up to a lot of moisture and tough use. The major downside is the lack of spiral binding. This atlas doesn’t lay flat very easily and after a few uses, the map falls apart…on both the ones that I currently own and have previously owned. I really like this map because it has great content and the topographical info is really helpful, but in reality, the map has the fatal flaw of falling apart. There simply is no telling when a page will fall out or blow away in a gust of wind. Who likes trying to keep 160 pages of a large map in order? No one. And this is a big deal for me.

Across all aspects of the atlas, there is good detail, from both the type of content and the layout. The symbols, font type, and design is top notch and by far the easiest to use. The color contrast is on the light side, but that makes it easy on the eyes. The county lines are distinctly different and are represented as black dashed lines and highlighted yellow. All the roads have an obviously distinctive different color, unlike the other two atlases. Again, this makes for easier reading and quick orientation.

The color distinction between the words, symbols and roads can’t be emphasized enough, this one is hands down the best reading atlas.

Unfortunately, the lat/long is printed inside the border and on the face of the map. This makes the information difficult to see and creates eye strain. When navigating and route planning, I’m looking for every advantage I can get, including less eye strain.

This atlas has a good cover page with spiral binding. The paper felt solid and had a good feel.

On all the even pages of the atlas, the scale was prominently displayed across the top of the map. Like seriously predominant…the scale itself was over 6” long and nearly 1/2” tall. At the top of each odd page was a small color index, indicating what the various vegetation colors on the atlas represented.

The latitude and longitude were written in very small, black type that was often were overshadowed by the content of the atlas. The lat/long was imprinted onto the atlas image (not in the margin). This caused the typeset to interfere with other symbols on the map, making both the lat/long and the atlas itself illegible at times.

It seemed like they tried to cram every single street and detail onto the page. In the larger cities, it appeared like everything just ran together, and it often was a distraction making the atlas difficult to decipher and use. 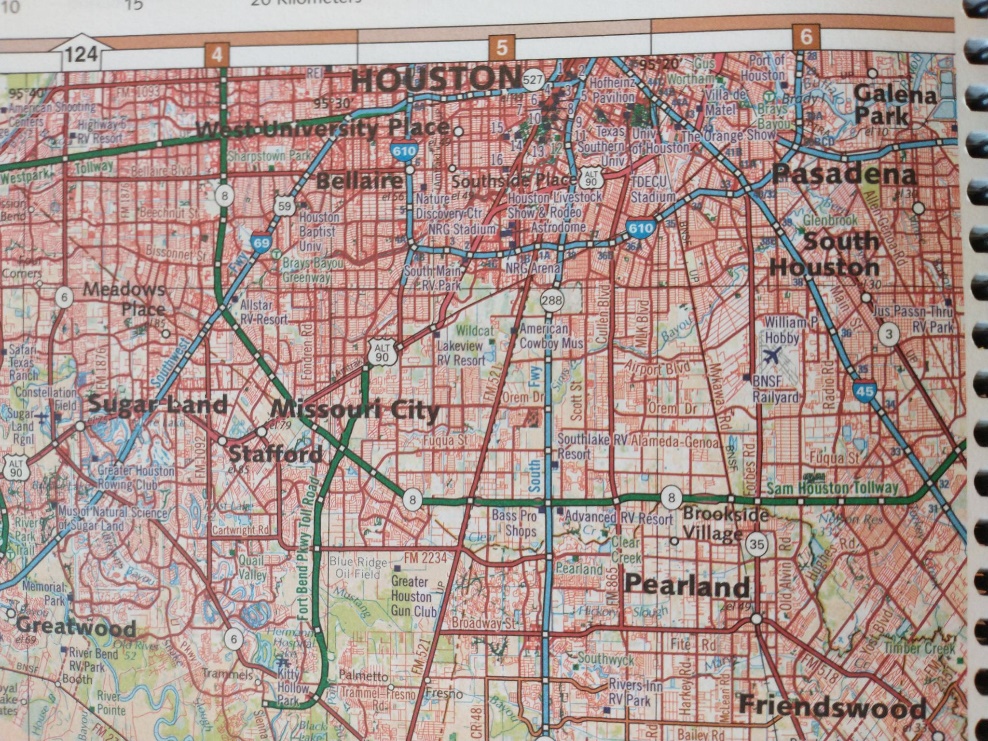 Making it worse, most of the minor streets and street names are in varying shades of red. To clutter the map up more, the points of interest are in a hue of purple and when put on top of the light colors used for the land vegetation, the image becomes washed out and the data runs together. Not user friendly at all.

This legend page was the best of all three atlases. The entire inside cover page was used for the legend which allowed plenty of space for symbols, notes and explanations. Despite being a recent Amazon purchase that listed this as the newest “2021” version, the inside cover was marked as 2019. Overall, it’s a usable product, but the lack of clarity on the color contrast makes it my least favorite.

No matter which atlas you pick, make sure it works for you. Use it often, appreciate the benefits and understand the shortcomings.